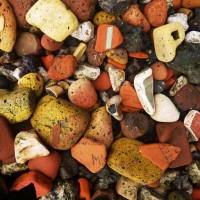 The summer weather is back to normal in London; grey, cool and slightly drizzly. Undeterred,  we set off to a free outdoor jazz concert at Canada Square on Canary Wharf.


The two of us sat on the grass and listened to the Nathaniel Facey Quartet, who were very impressive. The piano player looked like he was still in his late teens, and when they finished we were told he was heading off to the USA to return to university.

We decided to explore the West India Docks while the next act was setting up, and set off through the tall, mirror-glass office blocks to find a bit of history. There is only one entrance to the docks these days, but the lock is big enough to allow large ships in. It also means the Isle of Dogs is not really an island any more.

As we walked around the bank of the Thames, we came to a beach, and decided to do a bit more fossicking for artifacts, or “mudlarking” as it is called here. Felicity has since discovered that you are not allowed to disturb even a single rock unless you have a licence, and that anything over 300 years old or anything made of silver must be reported to the British Museum. You can take anything you find on the surface without a licence, and you can usually keep old items once the museum has recorded them. There have apparently been professional mudlarks operating since the 1800s, but they were digging in raw sewerage, rotting rubbish and even corpses.

Our first finds were what we thought were stones with glossy centres, but we soon realised they are smooth, round bits of glass which have become covered with calcium deposits over the centuries. I also found a very worn section of steel cable, a piece of porcelain that I estimate to be from the 17th century (give or take 300 years or so), and numerous flat nails that probably held sailing ships together.

Then my heart skipped a beat when I discovered some real treasure! Two coins that were clearly ancient. With trembling fingers I scraped off the mud, wondering if I was about to see Julias Ceaser’s face appear. I’ve seen people bite coins in movies to see if they are gold, but even though the Thames is much  cleaner than it has been for  centuries, that seemed on reflection to be a foolish idea. Then I realised to my bitter disappointment that I was looking at a familiar face. The coins are not even as old as I am. I am 3d richer though, and I am allowed to keep them.

Continuing on around the waterfront,  we came to a rather beautiful and unusual building. Felicity wondered if it might be some kind of temple. We walked around the front to discover it is the Isle of Dogs Pumping Station. The Brits sure place a high value on the athscetics of their sewerage infrastructure.

By now we were getting close to the Mudchute area where we have already been, so we turned inland and walked back through suburbia towards the skyscrapers. We saw a bunch of kayakers looking in vain for whitewater, and tried to convince the guy in the blue one to do an eskimo roll for us, but he said it was his first time and refused.

Further down the dock we passed some very flash houseboats, many of which looked capable of travelling to Europe and beyond. One of them had a familiar name.

Back at Canary wharf, we were distracted by a sculpture exhibition by Halima Cassell. Our favorite was a series of bowl shaped objects made from clay sourced from all over the world, each with it’s own unique design, colour and texture.

By the time we returned to Canada Square, we had completely missed the next act, so we watched the third band for a while. Soon we were both ready for coffee and dinner, and as the music wasn’t really doing much for either of us we headed to the supermarket and home.

2 thoughts on “Canary Wharf and Isle of Dogs”