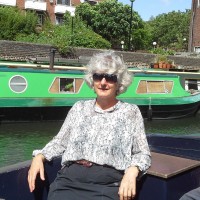 This museum is in an old warehouse which used to belong to Carlo Gatti, who became famous first as an ice importer then as an ice cream maker.


Before the days of refrigeration, natural ice was stored in deep pits and distributed in blocks to shops and wealthy households. Gatti used to import his ice from Norway to supplement what he could obtain from the local canals. I didn’t think a gin and tonic made from canal ice sounded very appetising or safe, but the guide informed us that it never came in contact with food or drink; it got put in ice-boxes with a separate compartment.

We were fortunate enough to be allowed down into the wells, which once were 13 metres deep. When the technology to make ice in factories arrived, local builders used the pits to dispose of excavated spoil, so the space we were in has been recently dug out by museum staff to a depth of 4 metres or so.

Gotti imported a cocoa grinding machine and set it up in the window of his restaurant to attract attention. When he started making icecream he would invite customers to “try a little”, which in Italian is “ecco un poco” – so it seems the name Hokey Pokey did not originate in NZ as I once thought.

The photo of the museum’s top floor shows the ramp which horses used to reach their stables, because ground floor real estate was too valuable in central London.

On the building behind the boat ‘Tarporley’ you can see cranes where barrels of Guinness from Ireland were landed and bottled for the local market.

The museum runs occasional trips on this boat though the Islington Tunnel,  the longest in London at 886 metres. It actually passes under a river! Originally there were four shafts to remove excavated clay and provide ventilation, but when housing was built around them locals began to chuck their rubbish down so the canal company sealed them up. There is no tow path, so at first the boatmen had to lie on planks and push the sides of the tunnel with their feet in a process called “legging”. In 1826 they introduced a steam tug, which was a lot easier, but would just about asphyxiate the crew.

The final photo was actually taken on our way to the canal museum, when we visited Chinatown to pick up some groceries. This Chinese man cycled all the way from Beijing to London on his tricycle rickshaw to see the Olympics.