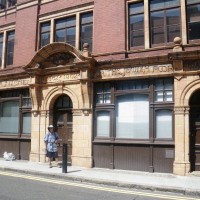 The area around Whitechapel is where immigrants to London often settle, probably because it has traditionally been one of the cheaper (ie: slum) areas to live. We started walking at Aldgate, where the Roman road to Colchester passed through the city wall.


Outside the tube station, nine person pedal-powered quadracycle passed us, but I don’t imagine it would be much fun off road!

We saw a road named Houndsditch, which used to be a drain just outside the wall where people threw their rubbish, including dead dogs. About 500 years ago it was filled in and paved. Recent construction in the area unearthed numerous dog’s skeletons.

Although the first main group of immigrants to the area were Huguenot silk merchants and weavers fleeing Catholic persecution in Europe, by the 19th century they were being replaced by Jews, who took over many of the clothing businesses. We saw several old synagogues, and a Jewish soup kitchen built in the 1902 (or 5662 by the Jewish calendar). In the great depression it used to feed over 5,000 people a week; the door on the right says “Way In”, and the one on the left “Way Out”.

The rather decrepit building with the red doors on Princelet street has been used in several films of Dicken’s stories because it is actually quite an authentic example of an 18th century house.

The Brick Lane Jamme Masjid Mosque, with its tall silver minaret, is one of the oldest buildings in the area, and has an interesting history. It was built in 1743 as a Huguenot school and chapel, then purchased in 1809 by a group of evangelical Christians who offered the enormous sum of £50 to any Jew who converted to Christianity. After 80 years and thousands of pounds spent, they could claim only 16 genuine conversions. It seems there were a number of serial converters, who patronised this and other organisations as many times as they could get away with.

In 1897 the building became the Spitalfields Great Synagogue, but by the end of the 20th century most of the Jews had moved to more desirable areas of the city, and in 1975 it was converted to a mosque.

The bell on the footpath in front of Felicity is one of many in the area, marking the presence of the Whitechapel Bell foundry, where Big Ben was cast. The crane over the gate would have loaded the finished bells onto carts for delivery.

Brick lane is now one of the centres for the Bangladeshi community, and there are many Indian restaurants and food markets with exotic dishes from all over the world. Because it is Ramadan, Moslems are not allowed to eat or drink anything until sunset (about 9.30pm), so it must be hard for them to watch everyone else drinking cold beer and eating nice food. In this heat, it’s probably pretty unhealthy to avoid drinking during the long daylight hours.

We stopped at the old Spitalfields city farm to eat our sandwiches, and when we sat down on a park bench beside a couple of black guys I felt a bit guilty about munching my ham sandwich until I saw to my relief that they were drinking a beer and sharing a cigarette.  Obviously if they were Muslims they weren’t concerned with observing the fast.

The Trinity Almshouses in Whitechapple Road were built in 1695 for retired sea captains or their widows; you can see a sailing ship on the roof at the top right-hand corner of the photo. It is probably one of the most pleasant places to live in the area these days.

We ended our day with an evening at the Vortex Jazz club listening to guitarist John Etheridge. We shared a table with two very dapper gents a bit older than us in smart suits and matching tie-pins; in my shorts and tramping boots I felt a bit under-dressed but they were very friendly. The three musicians were absolutely fantastic, and the small venue meant we were right up close to the action.