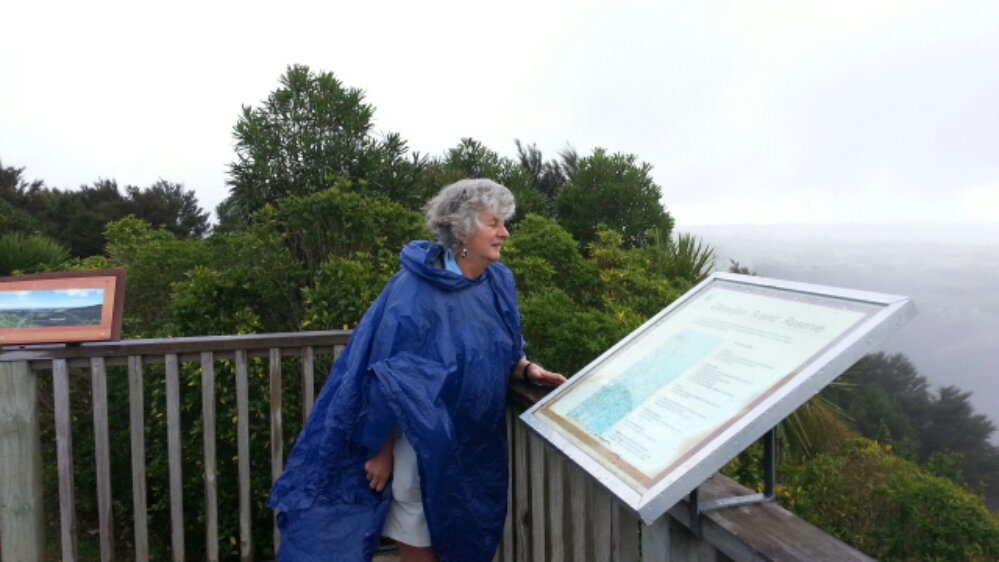 We’ve been exploring “one of Manukau’s most stunning reserves”, according to the Auckland City Council, with one of the few areas of intact native forest in the area.


The weather looked a bit dodgy for  kayaking this morning, but we felt like a bit of action. A quick look at Google Maps found a large park area that we had never been in, so we packed our ponchos in our daypacks and set off south.

The fridge was a bit bare to make a picnic, so we stopped in at Otara market in the hope of picking up a few delicacies.

Sadly, most of the available food was only suitable for people with aspirations to weigh hundreds of kg, but we found a couple of Chinese bread buns with somewhat interesting fillings. The shopkeeper performed an expert upsell by offering us one extra item for $1.00, so I cleverly chose something that looked like a pinwheel scone with sultanas, that turned out to be filled with rancid coconut.

After only a few minor navigation errors, we found Thorpe’s Quarry Rd and drove in to the car park. I was surprised to see a large Boy Scout camp, which turned out to have been opened after my time.

We climbed up hundreds of stairs, in a light drizzel that forced us to wear our ponchos. I was rather hot by the time I got to the top. The beautiful bush made it well worth the climb. If I had done a bit more research before we started, we might have noticed the endangered King ferns.

There is a viewing platform at the top from which a notice informed us one can see both the Manukau and the Hauraki Gulf. We had to take this on faith, because low clouds were obscuring most of the view. It was a bit damp to sit on the seat, but there was some dry grass under the platform so we sat there and ate our lunch. Not as good as the sandwiches Felicity usually makes!

Near the viewpoint we noticed a Te Araroa sign, and later back near the car park we saw another. If a walker continued around the loop like we did, they would end up back at the Scout camp – there is an unsigned turn-off along the way that is supposed to connect with Kimptons Rd on a nearby ridge.

Once we completed the loop track back to the bottom, we walked up the short road to an old quarry. It is being restored as a wetland picnic area, and is very pretty, with a small waterfall. Small children would enjoy this last bit of track.

As so often happens, we now have a new mission to explore Kimptons Rd and see how Te Araroa connects from that side.

One thought on “Clevedon Scenic Reserve”