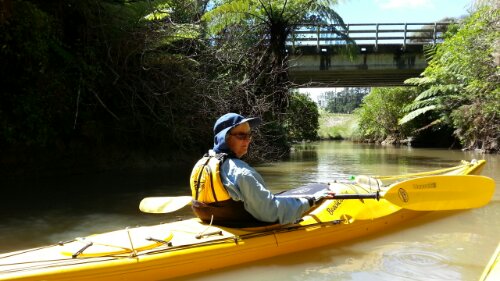 The tide wasn’t suitable for a lunchtime paddle today, but even though it was windy we were both keen so we loaded the kayaks early afternoon and set off.

We had a plan to launch at Stillwater and travel up the Weiti river, but a small navigation error on the way found us making a detour into Duck Creek. At first the wind made progress a bit difficult, but as the banks closed in it became more pleasant.

There are some very attractive properties along the Stillwater coast,  including a vineyard. Maybe we’ll be drinking local wine one day!

Eventually we paddled under the bridge that we had driven over on our way in. Very soon after that we could go no further, so we turned around and started down river again.

We stuck close to the left bank, which lead to several no-exit paths through the mangroves. We couldn’t find a way through, so eventually we returned to the main channel and joined the Weiti again.

The peace and quite was disturbed somewhat by an excavator loading what sounded like huge chunks of broken concrete into an empty barge moored at Stevenson’s wharf, but it was something to watch.

We considered landing for a rest a bit further on, but it would have been tricky so we decided we would head back to the car instead, and continue to Silverware another day.

When we arrived back at the camp-ground ‘beach’ and looked at the time, we discovered that we had been on the go for over three hours, so no wonder we were a bit tired.