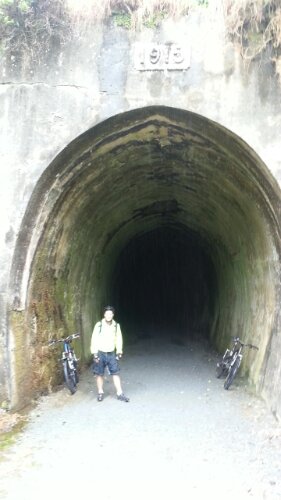 Yesterday Kerry and I drove up to the Bay of Islands to “experience Northland’s best recreational trail”, according to the brochure. According to the website, this trail was scheduled to be fully opened this month.

We asked at the tourist information office in Pahia,  but nobody knew a thing. Kerry had read somewhere that the trail was more or less ridable all the way, so we drove over to Opua, loaded our camping gear on our bikes, and set off down the disused railway tracks.

It quickly became obvious that not many people had ridden this section;  the rather wide gaps between the sleepers were not filled with enough metal, which made the surface similar to riding up stairs. There was also lots of knee-high gorse over the track, which made progress somewhat painful.

Eventually we came to the reason trains don’t use the track: a tunnel completely blocked by a slip! There was no option except to turn around and head back the way we had come. After a km or so, we came to a dirt road that looked like it headed towards the highway, so we turned down it to enjoy what turned out to be probably the most pleasant riding of the day.

Eventually we hit the main road, and immediately began climbing a seemingly endless hill, which drew our attention to every extra gram we were carrying. The down hill side was over in an exhilarating rush, and soon after we picked up the rail line again.

By this time it was early afternoon,  so we stopped for lunch, then set off on the final stretch towards Kawakawa. This turned out to be the most technically challenging part of the trail,  because we had to ride just outside the line of sleepers,  over rough and uneven loose scoria,  and with a steep scoria bank close by dropping down to a swamp. We were very glad to ride out into the main street.

After a bit of a false start, we found the recently opened section of the trail to a bit beyond Morewa.  This was flat and straight, and not the most scenic part of Northland in my opinion. Eventually the trail ended, and we found ourselves on a rural road.

We could see where the rail line used to run, but for the next 10km or so every paddock had signs saying “no cycleway on our land”, and “cyclists stay on road”. So we did, feeling most unwelcome. After a while we found a section of cycleway being built, but after only a few km it became too rough and we had to get back on the road.

The last few km to Kaikohe were up another steep and seemingly endless hill, so we were both pretty shattered by the time we finally rode into town. By this time the weather was looking pretty dodgy for camping, and since none of the other accommodation looked inviting we paid a shuttle $80 to take us and the bikes back to my car in Opua.

We spent another very comfortable night at Pataua,  then this morning,  even though there was still rain around, we drove up to Kaikohe to find the start of the main open section of the trail. Although it drizzled steadily,  and the wind was in our face, we quite enjoyed riding with no extra load  on an easy surface with only a slight gradient.

After an hour and a half or so, we arrived at Okaihau and looked for the cafe. While we were eating delicious home made pasties,  the rain began to bucket down, so our timing was perfect.

As we headed back past Lake Omapere,  I realised my back tyre was loosing pressure, so I had to pump it up several times before we got back to the car.

On the way back, we called into the hot springs for a soak. At only $4.00 entrance fee it is a bargain,  although it is rather run down.

I wouldn’t recommend anyone go out of there way to ride this trail, but we mostly enjoyed our trip.