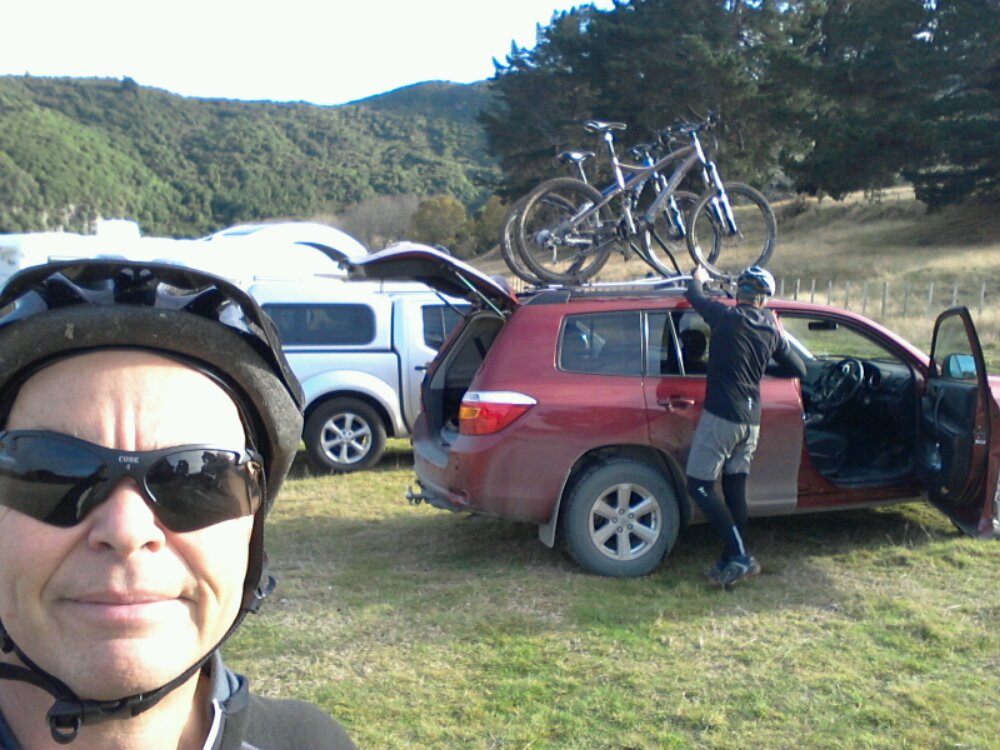 It took us a couple of attempts to find the start of this trail, but a couple of road cyclists at Acacia Bay put us on the right track. We were on our way by 10am, with the sun breaking through the mist and promising a warm day.

The track climbed fairly steadily at first, but at a grade that was easily ridable. We were making a fairly good pace I thought, but after about 40mins I realised a faster rider had caught us up, so we pulled off the track and let him past. About 5mins later, another couple of young guys passed us, much to Kerry’s chagrin. We picked up our pace and tried to keep up, but soon realised that we were getting left behind, so we slowed to a more comfortable speed.

The trail itself is one of the most bike-friendly I’ve ridden on, partly because of the pumice, but also because of the excellent track design. It’s obvious that keen bikers have been involved in the construction.

The only downside is that the track is two-way, and shared with walkers, so Kerry – in front as usual – had to be careful on blind corners. I could relax a little more, knowing that he would collect any out-of-control oncoming traffic.

At the first viewpoint we came to, we stopped for a snack, then turned off onto the Headland Track, a 10km loop that goes out to Te Tuhi Point and back. This part of the trail invites very fast riding, and we had to keep reminding ourselves that we might meet someone coming the other way.

After we joined the main trail again, we blasted down a long, long hill towards Kinloch. About half way down we met a couple of older guys coming up, obviously struggling. This made us somewhat apprehensive, knowing that we had to ride all the way up ourselves on the way back.

We ate a picnic lunch on the edge of the lake, next to the marina entrance, then rode a little further into the village to get a coffee at the local cafe. A local saw our bikes, and told us that he could shuttle us back to our vehicle in his van – I bet he does quite well out of tourists who over-estimate their stamina.

With renewed energy following our meal, we found the climb back up the hill much easier than we anticipated. The track is benched into the hillside, and never gets so steep that we needed to use our lowest gears.

Once we were at the top, knowing we would be at the car in less than 40mins, we threw caution to the winds and zoomed down the hill at high speed. Fortunately it was late enough in the day that we didn’t meet anyone struggling up.

Altogether I guess we were riding about four hours, and we covered about 32KM. Next on the list is the K2K track from Kinloch to Kawakawa Bay.

One thought on “Whakaipo Bay to Kinloch W2K”