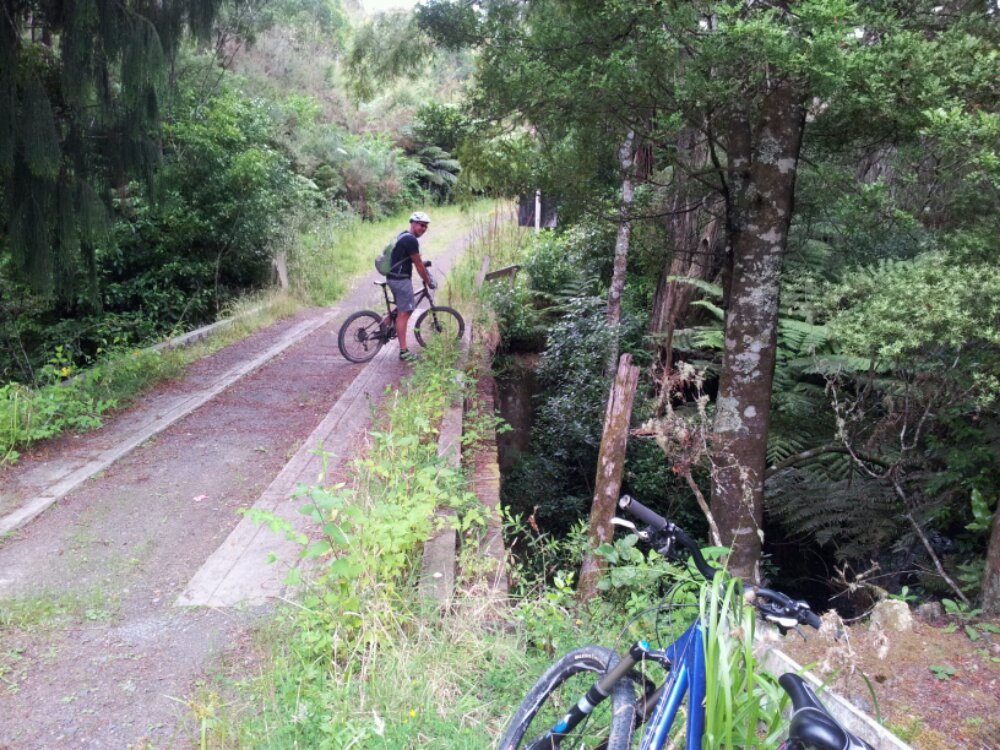 Rode another new trail today with Kerry, out past Whitford.

Soon after we entered the forest we came to a shelter with a map so we stopped for a look.

There is a great view of Auckland from the south, with Rangitoto in the background:

We started down the trail just opposite the map, which had a well-made sign saying “Pete’s”. This isn’t one of the names on the map, but we charged down it anyway and enjoyed about half an hour of challenging single-track.

We ended up on a nicely maintained road, and rode quite a way, mostly up hill, hoping to spot another bike track down again.

But the road continued upwards to the top of the hill with no sign of a return track. It then descended steeply into the next valley to the east. Temptation got the better of us, and a few exhilarating minutes later we were at the bottom.

Then a big climb up the other side, past a beautiful stand of nikau, kauri and pururi, and finally out in the open on the eastern side of the forest. We could see down over a few paddocks to the Wairoa River.

Kerry checked out the track down, and we debated whether or not to ride down to the highway below, then around the road to my car.

In the end we decided that we were more scared of traffic than a big uphill, so we headed back the way we had come. Fortunately we had packed some sandwiches in our bags, so we stopped back in the native bush for a rest and re-fuel.

One photo shows us crossing the bridge; about to climb unceasingly for the next half hour or so.

We made it all the way to the top without stopping, then were rewarded with lots downhill back to the car.

Now I am very tired, my legs sure know they did some work today!