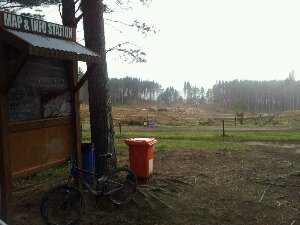 On my way out to Parakai to see Dad this morning, I stopped at Woodhill for a ride.

When I pulled in to the car park, I noticed that dozens of schoolkids were preparing to head off. I threw on my gear as quickly as I could, and jumped on my bike, but I was a bit slow, and got caught in heavy traffic going up the first hill. It was good practice at ultra-slow riding!

As soon as I could, I left the main trail and shot up beside the road to the first map board. I was astonished to see how different the landscape is now that the trees have been felled. I couldn’t see how much damage has been done to the tracks.

I headed for the Northern trails, because I was confident the kids wouldn’t get that far. When I arrived at Conifer Grove, I was pleased to see the grass around the picnic tables had been neatly mowed. Lots of deer shit lying everywhere though.

On my way home, I saw that the old tracks were now gone, and that a detour sign sends riders on to the Matrix trail, from where we proceed to Thai Massage then Happy Ending (no, I’m not making this up).

On my way down the final hill, I had a race with a logging truck travelling down the hill on the road. I was faster, but my trail wound in and out of the trees, so the truck reached the crossing point just before I did. I would have let him go first in any case I reckon!

Despite the recent rain, the trails are starting to dry out, and soft sand caused a few heart-stopping moments. Some of the newer tracks are still riding OK, but those on the Eastern-facing slopes and in the open might have to be avoided for the next few months.