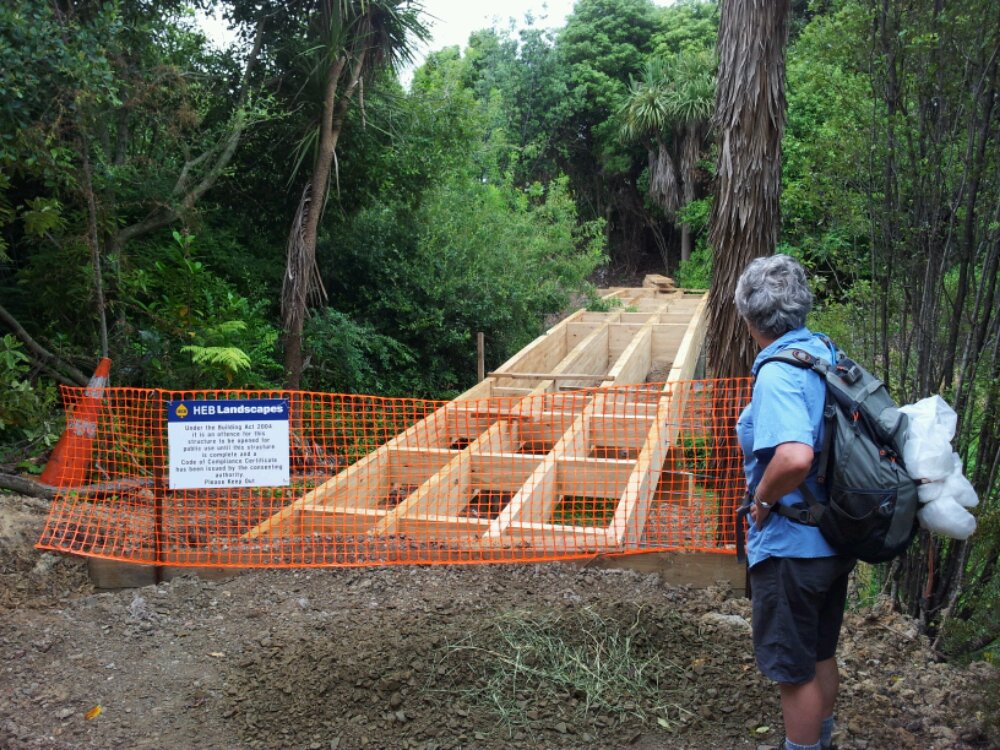 As we headed south on the motorway this morning, a gentle drizzle began which forced me to learn how to use the wipers on the new car. By the time we arrived at Lambie Drive it seemed to have settled in, so we donned our trusty ponchos and set off alongside the stream towards Manurewa. In the photo, Rainbow’s End is just visible behind the trees.

We were surprised to find a very attractive park, with lots of water birds. A weir in the stream has a serious fish-ladder, but the top looked blocked with rubbish to me.

We had to briefly return to the roads to bypass an undeveloped block with the stream running though it, under an interesting concrete bridge along the way. Once across Gt South Rd, we returned to a path beside the stream.

The Te Araroa website is rather out-of-date at this point – a new track on the true right of the stream leads all the way to the motorway underpass, apart from one bridge which is still a few weeks from completion.

On the eastern side of the motorway we pushed our way through 20 metres of scrub to the Botanic Gardens. A short way along the road where the Flower Show used to be, we found the entrance to the beautiful Puhinui Stream walk, which winds it’s way up to Totara Park.

At this point, we were following the written instructions on the Te Araroa website, which directs walkers to the top carpark then out along Redoubt Rd. We couldn’t see any trail signs, but were rewarded with a view of our picnic spot a few hundred metres away at the top of the Otara Creek, where we got to a few weeks ago.

After walking back down the Bridal Trail into the park, we saw that if we had backtracked down the road by the children’s playground, the Puhinui Stream walk (and the TA trail markers) continued up another tributary to the east. Although we continued following the trail almost all the way to Mill Rd, we couldn’t find any more markers in this direction. I assume this is the section currently listed as ‘closed’ on the TA website.

When we were nearly back at the Botanic Gardens, I spotted a final marker pointing up Wairere Rd. Pretty confusing, I reckon.

By now we were pretty hungry, so when we spotted a dry seat in a pavilion built in the Japanese garden, we were glad to stop and eat our sandwiches before retracing our steps to the car.