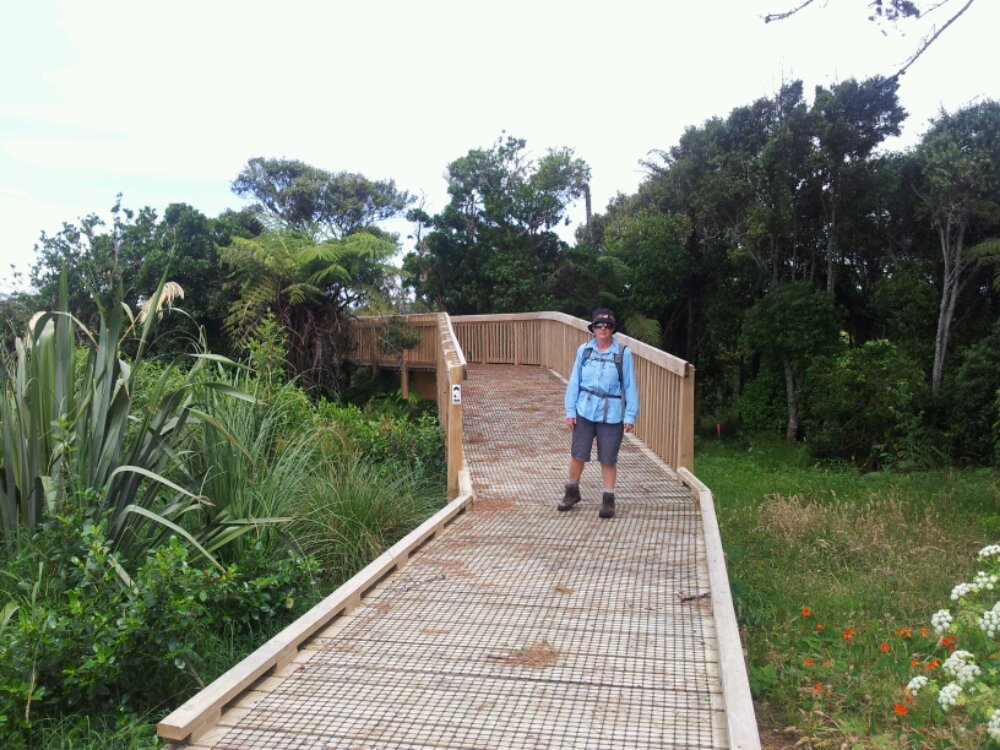 Our mission for today was to explore the section of the Te Araroa Trail that runs from the edge of the Manukau Harbour and up the banks of Puhinui Creek.


I didn’t get around to telling you, but last week we had a guest who was walking the newly-opened trail. I looked at his maps, and saw the trail marked from Puhinui Reserve, where I had run around a few months ago without seeing any Te Araroa signs.

We arrived about 9.30, and immediately spotted a trail marker, leading into the reserve. A short while later, another marker showed the trail leading through the fence (notice the cool mountain-bike-style). An attractive gravel path wound around the hillside. I might have even noticed the next marker, on a post just visible in the left background, but neither of us spotted the arrow pointing off the path and around the other side of the house; back in the direction we had just come.

After a couple of km of an easy, pleasant track, we crossed another bike style into a paddock. We walked a bit further through very long grass until I realised that we were heading south, and the track notes said Te Araroa went from the extreme north-east corner of the reserve. On our way back, we met a bunch of eight other walkers, so we asked them if they knew where the trail was. They deferred to their leader, a woman clutching a glossy magazine promoting the local section of the trail, and reporting on the opening of a new bridge across the Puhinui that the current track notes haven’t caught up with. But no map. Then a voice pipes up: “there was that funny arrow on the pole I noticed back at the beginning…”

Back nearly to the car park, we saw that the arrow indeed pointed off the trail and across the grass towards the NE corner. There was a gate through the fence, and the gravel path started again, leading up Puhinui creek (on the true-right). Soon we came to what was clearly the new bridge.

The trail continued, this time on the true-left, behind a row of tilt-slab industrial units. Then we came to a four way intersection.

The current trail continues to the right, over the white covered chain preventing vehicle access. We came back that way.

Straight ahead, the future trail continues along the creek on a lime-rock base, till it ends for now behind a fence next to the old Rosecommon Bridge.

Eventually it will continue towards the south-west. We walked down the road to where the current trail turns south, but turned for home and ended up back at the four-way intersection.

Next we crossed an interesting bridge over the Puhinui and connecting with a sealed (!!!) track going down-stream on the true-right.

Although there are several Te Araroa signs and arrows on and after the bridge; this is the old tail. The sealed track became increasingly over-grown and damaged, until finally it ended at a “No Entry” sign.

So we retraced our steps all the way back to the shore of the Manukau, where we found a shady tree to rest under and eat our sandwiches.

We then spent the next couple of hours out in the hot sun, walking along the bike trail that winds around the edge of the Puhinui reserve. On the way back, we crossed another bridge across the creek, but the farmer on the other side had fenced off the access so that people can’t get on his river bank. He was happy to let his cows walk and shit in the waterway, however:-(