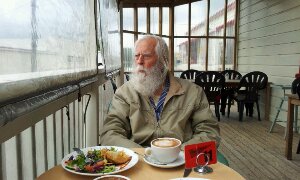 I was right, the Woodhill tracks were running sweet after all the rain.

I rode my bike around the Mad Butcher trail (mostly, until I got lost near the end), on my way to Parakai to see Dad. The photo is on the edge of Connifer Grove; I’m about to disobey the sign and ride my bike down through the picnic area to where the tables are.

I took Dad to the doctor’s to organise another visit from the Geriatric Assessment Team. He’s now totally reliant on me to do his shopping, and there doesn’t seem to be much cleaning happening any more. My main worry is that he isn’t taking all his medication – there is several weeks’ worth of surplus which he has missed.

We stopped at a cafe for lunch – I was hungry after my morning ride and polished off my sausage and egg tart in a few bites.  Dad was still eating his almost half an hour after I took this photo – with me getting increasingly anxious – we only just made it to his appointment in time.

On the mental function test (which the nurse found via Google), his score was noticeably worse than last time. He didn’t know what month it was, for example.

He had to repeat back several series of random words (eg: boat, hand, stick) which he managed OK. She next asked him which season it was, which he knew, then she asked what the last sequence of words was; of course he didn’t have a clue.

“Lucky it’s not me being tested”, I had to confess.