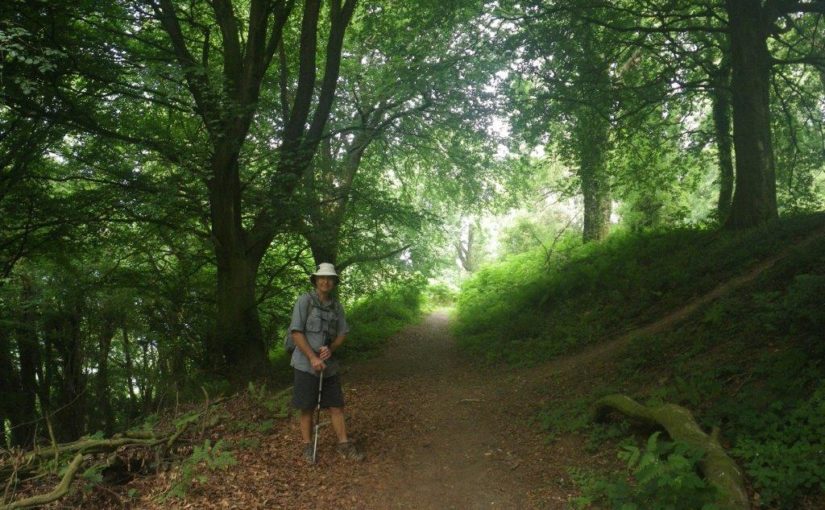 This weekend stayed with friends in village of Lower Failand (near Bristol). They had invited us to join them on a walk in Wales, just across the Severn River from their home.


We took the train down to Bristol on Saturday afternoon, and changed to a local train to Nailsea where Martin picked us up in his car. We enjoyed a lovely dinner sitting outside on the patio watching the sun set behind the Welsh hills on the other side of the Bristol Channel.

After breakfast we packed ourselves into the car, and drove across the motorway bridge to Wales. I was interested that we passed near the mouth the River Avon, which we have encountered several times on our adventures already. It only took us about 45 minutes before we arrived at the car park for the Clytha and Coed y Bwnydd walk.

At the top of the first hill we came across an 18th-century folly named Clytha Castle. It was built by local landowner William Jones with the purpose of ‘relieving a mind afflicted with the loss of a most excellent wife’. It is currently rented out to holidaymakers so we did not go inside.

The path continued upwards, across several styles and a field of barley. The top of the hill is surrounded by large trees, covering what used to be an iron age fort. Mostly what we could see was circular ditches surrounding the summit (photo 4). I would have liked to have had a spade and been able to start digging for treasure, but I suspect that wouldn’t have been cool because it is a scheduled Ancient Monument.

Coed y Bwnydd is the largest and possibly best preserved hill fort in Monmouthshire. It has a history of human involvement stretching back more than 2,000 years. There were occasional piles of rocks which may have once been a part of walls, but otherwise there was little sign of habitation.

The track down the far side of the hill led to some small county roads which we followed until we found a small sign indicating another path across the fields.

When we came to a graveyard with a bench seat in the shade we stopped for a picnic lunch. Amongst the graves were some huge hollow yew trees, some of which are estimated to be thousands of years old. Before we left we explored inside the small stone church.

St Aeddans Church was originally a place of prayer founded by Irish Aedan of Ferns in 6th Century. Also known as St Maedoc, he is said to have broken a jug while fetching ale for his fellow monks. After making the sign of the cross over the shards it was miraculously repaired.

The church dates from the twelfth century but the current building is medieval (15th C). The interior contains a rare rood screen and rood loft carved from oak. A rood is a large cross, and the loft may have been used as a singing gallery. We found a very narrow locked door in the inside wall of the church leading to a stone staircase. This is apparently “the most complete rood arrangement remaining in any church in England and Wales”.

Just as we arrived in the village of Bettws Newydd, we spotted a very flat snake on the side of the road. Felicity reckons it was a grass snake, which is not venomous.

We stopped for a drink in the garden of the Black Bear Inn. This pub dates back to the 16th century when it was used as a coaching inn. None of us felt like alcohol, so we were intending to ask for coffee, but in the nick of time I noticed they didn’t have a machine, so to avoid getting served instant we purchased a cold drink instead.

From there the path basically followed the River Usk back to the car park. I was carrying swimming gear, and was a bit tempted to go for a dip, but it had clouded over and getting rather late in the afternoon so I wimped out.

From there it was a short drive back to the main Bristol railway station where a train was just about to leave. It looked like all the seats were booked and for a few anxious moments I thought I might have to stand all the way back to Birmingham, but fortunately for me a couple must have missed the departure time so I ended up with two seats most of the way.

3 thoughts on “Clytha and Coed y Bwnydd walk in Wales”