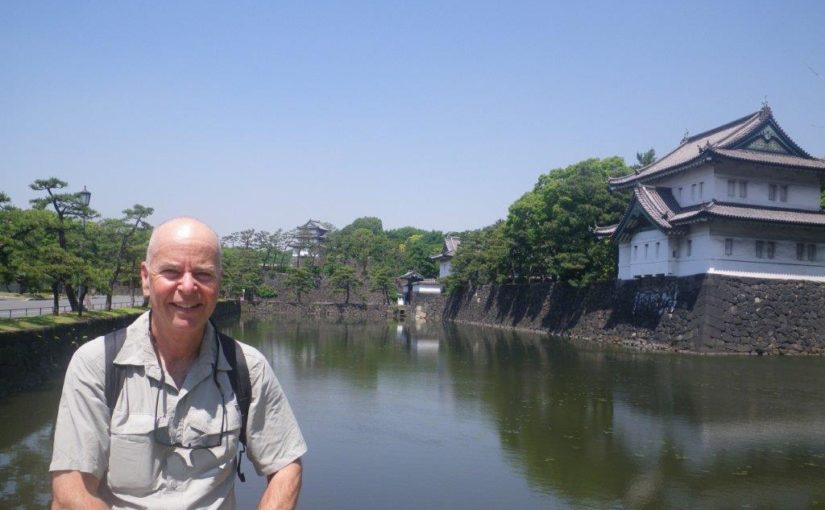 On our way to Europe for a couple of months, we stopped for a couple of nights in Tokyo to break the trip. We were very lucky to have a fine sunny day, which we spent walking through some of the city’s parks.


Our hotel was in Hatchobori, not far from the famous Ginza shopping area. After catching a limousine bus from Narita Airport into town, we made a couple of short metro rides to the street where the hotel was supposed to be.

We found what we thought was the right place, but they told us we did not have a booking. It turns out that the APA (Always Pleasant Amenities) Hotel Group is the largest chain in the country, and that our booking was for a sister hotel a couple of blocks further down the road.

The hotel was quite modern and functional, but our room was tiny – just enough room to walk around the double bed, but not enough to open a suitcase on the floor. We were amused to find the toilet had a sophisticated control panel that causes small jets of water to squirt into strategic places with variable pressure and temperature. There was even an “oscillation” function. I gave it a try once, but I can’t say I’m a fan.

We woke up at the crack of dawn (because of the time difference), and purchased a selection of interesting-looking but hard to identify food floating in a warm bain-marie from a FamilyMart across the road from the hotel. Afterwards we headed out on foot towards the Imperial Palace Gardens.

In most of Tokyo you are surrounded by tall high-rises, and it is difficult to get your bearings because there are few landmarks. In the huge gardens however, there are places where all you can see is trees and grass in every direction, despite being in the center of a metropolis of nearly 38 million people.

You aren’t allowed in to the Imperial Palace Hibiya Park due to it being the emperor’s home, but we were able to see bits and pieces from the outside. There was one place where we walked through an old guard house. The original timber floor was protected from the tourist hordes with a particle board platform covered in vinyl, but they still made us take off our boots and carry them with us in a plastic shopping bag.

There are heaps of uniformed guards everywhere keeping the masses under control. There are many paths you aren’t allowed to ride bikes on, and we saw one guard almost running across a large car-park while blowing a whistle and waving his arms because a biker had taken a wrong turning. The grounds were almost completely rubbish free. I saw a single scrap of paper on the ground at the same time as one of the guards patrolling on a bike, and he immediately raced over to pick it up.

A couple of metro rides then took us to Shinjuku where we took a lunch break then explored the Shinjuku Gyoen National Garden, which is a 143 acre park on the site of an estate formerly owned by the Naitō family. Most of the garden was damaged by bombing in WW2, but it has since been transformed into another oasis of calm and tranquility in the big city.

It was late afternoon by the time we finished with the gardens, and we were both feeling rather tired after walking most of the day. We headed back to the hotel by metro, and arrived before rush-hour traffic.

A short siesta and some coffee restored our energy, so at about 7.00pm we headed out again in search of dinner. We took the metro to Shibuya and Harajuku which is the area where many of the city’s young people congregate. There were shops things like selling costumes and masks, and we saw quite a few of the (very rare) non-conformist Japanese displaying body piercings, tattoos, and punk clothing.

It took us quite a while to find a place to eat, because it turns out young Japanese perfer to eat pizza, hamburgers and waffles rather than the traditional local food that we were looking for. We eventually discovered a small noodle shop where we purchased a couple of bowls of “traditional Harajuku ramen” (noodles).

Because it was hot and we were rather thirsty after our long walk, we drank some Kirin Beer with our meal which tasted not much better than than Lion Red, made by the same company.

For our final activity of the day we left the metro at Ginza and walked for a couple of blocks people-watching. Ginza is the street where all the big international consumer brands have flagship stores, and where the sky is famously lit at night by all the neon advertising signs. It didn’t take long for us to realise that we were both exhausted so we cut our walk short and returned to our shoe box for a well-earned sleep.

3 thoughts on “Tuesday in Tokyo”