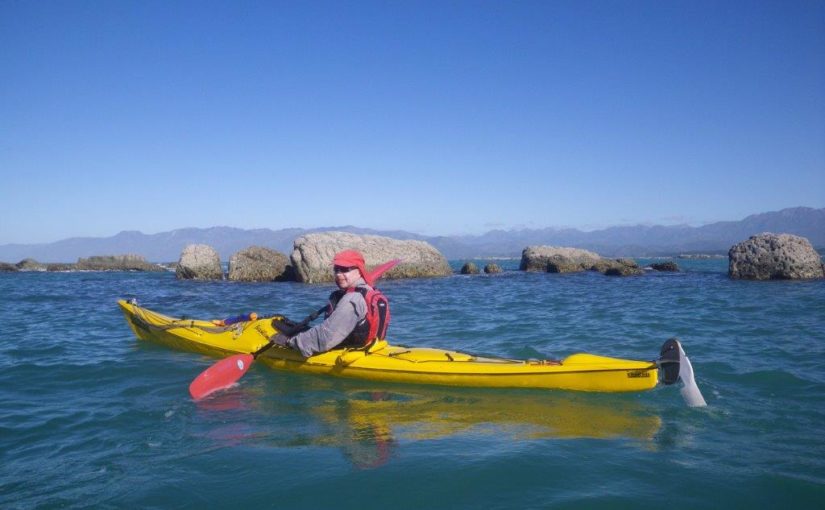 As Felicity managed to have her two weeks annual leave scheduled just before Easter, we took the opportunity to head for the South Island with our kayaks on the roof of the motorhome.


We had a funeral to attend on the Saturday we planned to leave, so we packed all our gear and hit the highway immediately afterwards. I was glad that we made it to Taupo by evening because that meant it would be an easy drive to Wellington the next day. We parked up with about a hundred campervans at 5 Mile Bay, and left again straight after breakfast.

The new Wellington expressway from Mackays to Peka Peka must cut about 20 mins off the trip into town – it will be even better when the next stage up Transmission Gully is completed. We stopped for a late lunch at Paekakariki and met up with a couple of friends on their way back to Auckland in their campervan. Our conversation with them added about half a dozen new destinations to our list of places to visit.

When we arrived in town we drove straight for the carpark behind Te Papa, and found that the Sunday market had just packed up, which meant we got the best spot nearest the harbour. It costs $30 to park overnight, but as it meant I would be able to drink wine at dinner then walk home it seemed like good value.

It was a warm, sunny afternoon, so we strolled around the coast to Oriental Bay and jumped into the sea for a swim. I reckon the water temperature is several degrees colder than Auckland, so we didn’t stay in long. We showered at the handy changing rooms, then returned to the motorhome for a coffee.

We had arranged to meet our daughter Judith and her boyfriend at a restaurant in Cuba St so we walked through town and enjoyed an excellent vegetarian meal. Our night downtown was quieter than I expected, but from the crack of dawn we heard dozens of runners and cyclists passing our window – a slight downside of being right next to the harbourside walkway.

Our ferry to Picton didn’t leave until afternoon, so we went for a quick hike up the Southern Walkway towards the top of Mt Victoria, although we didn’t have time to get right to the top. The trip across Cook Strait was very pleasant – after lots of people warning me that a cyclone was about to hit and the sea would be rough, I barely noticed any movement and was able to read my book all the way.

I had been thinking we would stay the night in Picton, but Felicity was keen to be somewhere more scenic. We headed for the DOC camp at Marfells Beach, just south of the Lake Grassmere Salt Works. The sun was setting by the time we arrived, so we passed up the opportunity to have a swim, and admired the view of the North Island instead.

The drive to Kaikoura was interesting – there must be thousands of workers repairing the road after the earthquake in 2016, and more recent damage from a storm in January this year. The road is only open during daylight hours, and many sections are single lane with stop/go signs at each end. We were delighted that nearly every road-worker gave us a friendly wave.

Having seen the extent of the damage caused by the earthquake, I am amazed that they have got the road usable so quickly. I had expected that they would ignore environmental concerns and push most of the rubble into the sea, but if they have done so it isn’t obvious. In many places there are stacks of shipping containers between the road and the cliffs to stop boulders tumbling onto vehicles. We saw a couple of helicopters transporting equipment and material to workers suspended by ropes high on the cliffs.

In Kaikoura we scored what was probably the last available spot in the NZMCA park at the trotting club, which was actually probably the best, just inside the gate looking out over South Bay. While we were drinking coffee we noticed several whale watching boats turn up, and sure enough there was a pod of whales to entertain us about a hundred meters off the beach!

After two days of driving we were keen to stretch our legs, so we walked around the Kaikoura Peninsula Walkway to see the seal colony. Out at the end we descended a flight of stairs to the sea-shore, then continued around to the town. The track passed very close to one seal, but on close inspection I realised it was dead – probably fairly recently judging by the lack of smell. After we reached the carpark on the northern side of the peninsular, and proceeded along the boardwalk towards town, we came across another seal right in the path and very much alive.

While we were walking along a suburban street looking for Toms Track back to the south side of the peninsular, we came across an earthquake damaged building that has yet to be repaired. The only other obvious sign of the earthquake is the vast new area of reef that has risen up from what was previously sea.

In the morning it was sunny and warm, so we launched the kayaks and paddled out into the bay. I had seen a group of tourists with a guide heading for the point at the southern end of the beach, so we followed them hopefully. There was not much wind, but quite a big swell, so I was a bit dubious about going out far enough to get around the point, and surprised that a guide would take inexperienced paddlers there. When we got close to the reef however, we found them all tucked into a small sheltered cove looking at some seals.

We turned back and headed to where we had seen the whales the day before, but sadly they were elsewhere. The sea was a bit rougher than we like, but it was worth the effort.

South of Kaikoura we passed through many more sections of road construction. There are two places where the road goes through short tunnels under the cliff, and in both places only one of the twin tunnels was open. It was a bit disconcerting to see big signs saying “Danger – No Stopping for the next 7 km”, then come around a corner to find a one way section of road requiring us to wait for traffic coming the other way.

A short scenic detour off the highway took us to Gore Bay where we stopped for lunch. The sea was very rough, but we were keen on a swim so we plunged into the fresh water lagoon at the end of the Jed River instead.

Our next stop was at Rangiora where I caught up on some work in the supermarket car-park while Felicity cooked dinner to take to our friend Jeremy in Oxford a bit to the south. We parked for the night in his driveway, and had a great time socialising with him and his son and daughter-in-law.

In the morning they cooked us a breakfast of bacon and eggs, after which we felt the need to climb a mountain to burn off the calories. Nearby Mt Oxford seemed like a good choice, so we parked at the road at Coopers Creek and set off into the bush.

It was hot and sweaty work climbing up the hill, but that changed soon after we left the treeline and continued up through the tussock. There was fierce wind blowing from the south, and the air temperature seemed to be much lower than down on the Canterbury Plains. Just below the 1000 meter mark we decided to turn back, and looked for a spot to eat lunch. We ended up going back down into the trees before we found a somewhat sheltered spot with a great view of Christchurch’s Port Hills and the east coast. We still got rather chilled and it was a relief to get moving again.

By the time we arrived back at our vehicle we were just warm enough to plunge naked into Coopers Creek for a wash. It was rather brief, but I’m sure we both smell better as a result. We are parked in a lovely spot and there aren’t any “No Camping” signs, so we have decided to stay the night.

One thought on “Auckland to Christchurch”