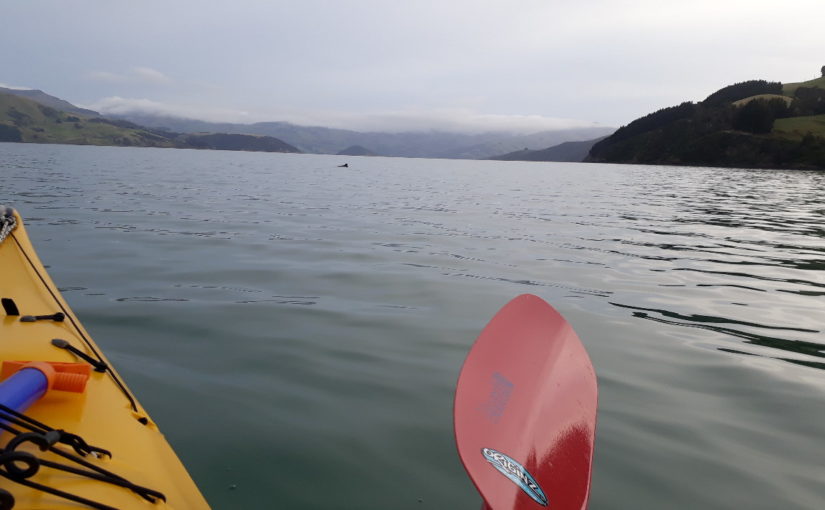 Akaroa is a famous French settlement on a harbour at the southern side of Banks Peninsular near Christchurch. We parked for the night at the boat ramp, planning to go for a paddle first thing in the morning.

It seemed we had left the rain far behind because the sun was shining and the temperature so much warmer than it had been further south. We were even inspired to go for a swim before dinner!

The whole of Banks Peninsular was once a huge volcano, and Akaroa Harbour was one of the many craters, now filled by the sea. Looking at the high peaks all around us we could see that there must have been some spectacular eruptions 6-11 million years ago.

When we woke up the sky had clouded over and the surrounding peaks were lost in the clouds. But the water was absolutely flat so the conditions were perfect for a big expedition.

After about an hour and a half of paddling I thought I saw a dolphin break the surface up ahead, and next minute Felicity was shrieking with excitement as a pod of about a dozen animals surfaced all around her. Some of them swam right up to us and dived under our boats – they are obviously used to seeing kayakers. We sat for about 15 minutes trying to get photos, but it is quite a challenge to catch them in time.

Out near the heads we found a deep sea cave, and I managed to get deep inside it. The rocks outside were covered with mussels, so we harvested enough for tonight’s dinner.

We were on the water for over three hours, but this journey was the best paddle of our trip and we are very satisfied.

As we have a date with a ferry to Wellington we spent the rest of the day driving north, and are now at Hamner Springs for the night.