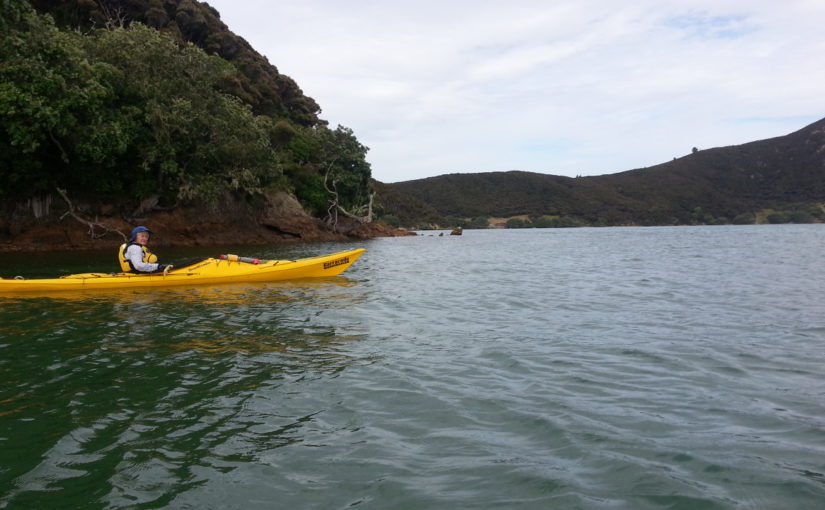 I’ve never visited Ahipara, so we took the car ferry from Rawene across to Kohukohu and drove north along the Mangamuka river instead of returning to Kaikohe. The south end of Ninety Mile Beach is quite pretty, but somewhat spoiled by constant traffic driving at speed up and down the beach.

As the two vegetarians in our party had gone back to Auckland for a party, we stopped at Kaitaia to buy some steak for our last dinner of 2017. While we were filling the motorhome with water, we talked to an old guy who had retired to a lifestyle block in the area. He told us that when he left his cottage for a few weeks recently, he came back to find it completely stripped of his possessions – even the window frames had been removed! Now he lives in a shipping container that can be securely locked.

We stopped to eat lunch on the shore of Lake Waiparera near Waiharara, but a sign warning of a toxic algae bloom put us off swimming or kayaking. A large middle-eastern family was camping there illegally, so we were entertained by exotic music while we ate. Their children were splashing about in the water attempting to catch small fish, and I wondered about drawing their attention to the sign, but the water didn’t actually look too bad compared to other polluted waterways we have seen.

Our plan was to stay the night at the Paua Reserve on the edge of Parengarenga Harbour and go for a kayak on New Years day, but when Felicity rang the woman who controls the key to the gate she was told that the campsite was closed because visitors had been “taking too many fish”. Several other camping grounds in the area were full, but we eventually found a spot in Wagener Holiday Park, at the south head of Houhora Harbour.

Even though the tide was out, we decided that we could drag the boats down a short flight of stairs and launch without getting too muddy. There was a fair bit of wind, but it only bothered us slightly when we were in the main channel and the incoming tide made it a bit rough.

We hugged the shoreline as far as Houhora Tavern, then crossed to the northern side of the harbour and returned past Motuotuna and Tokoroa Islands. The water was incredibly clear, and one advantage of the relatively shallow water was that we could see fish and even stingrays swimming underneath us. There were also lots of mullet jumping out of the water, and near the end several schools of sprats desperate to escape a larger fish chasing them.

There were a couple of derelict moored fishing boats that looked long past their use-by date, and across from the campground a couple of shipwrecks sinking into the mud. The last bit of paddling past Tokoroa Island was a bit exciting due to the strong current caused by the incoming tide, with the added challenge of fishing boats returning from the ocean at high speed creating big wakes. Fortunately it was only a few hundred meters, so by about 6.00 we were back at the motorhome drinking coffee.

4 thoughts on “Houhora at New Year”