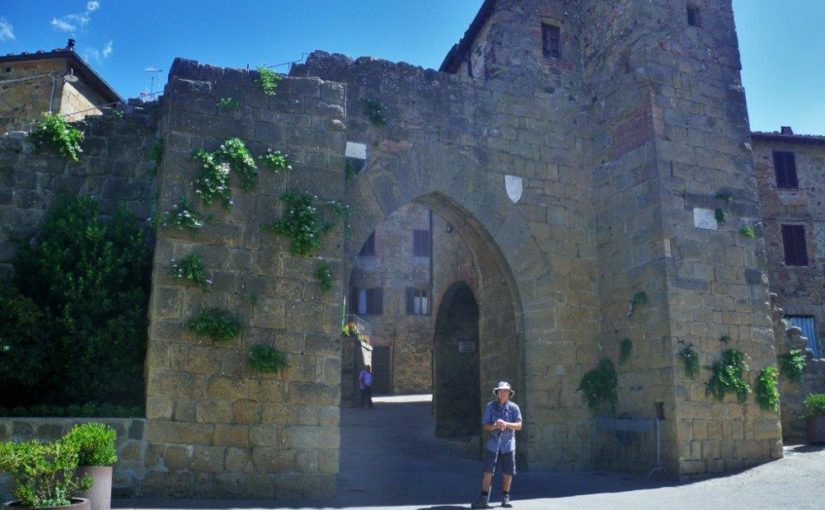 On the last day of our walk through Tuscany we have covered about 15 kilometers, because we made a detour along the way to visit the hill town of Monteccheillo. About half a km outside of Pienza we had the option of an alternative road because the GPS waymarked route can get muddy – not much chance of that today!

Our way led mostly downhill for the first hour or so, but when we came near to Monteccheillo we had to climb quite a bit. This is another well-preserved medieval hill town, and as it is a bit off the tourist route there are no shops or advertising along the winding streets and alleys. Most of the wall is intact, although some of the towers have gone and others have been converted into housing.

Because it is Sunday, there was a church service going on in the main cathedral so we just briefly peeked in the door. The repeated choruses of “hallelujah” have led us to believe it would be packed with worshipers, but there only seemed to be a dozen or so.

The main piazza was filled with scaffolding and theatrical equipment. Once a year the villages write a play and perform it in their particular dialect, and it must have happened recently. Up the hill, we came across what looked like a communal laundry, unless it is the remains of some long-closed industry.

To rejoin our proper route we had to follow a small track around the base of the town wall. At one point we came across several plum trees that had dropped dozens of oval, purple plums on the ground. We both ate as many as we could find. Somehow we got a bit lost as we followed a small trail down through the forest, but eventually the GPS guided us back onto the proper road.

After that we had a long slog up hill again, which fortunately was mostly in the shade. We found a shady spot under an oak tree to eat the sandwiches Felicity bought in Monteccheillo. The road then led down a bit before we saw Montepulciano ahead at the top of a hill.

As we started climbing again, we passed the huge Temple of San Biagio. This was built between 1518 and 1543 and at the time was the biggest church around except for St Peter’s Basilica in Rome. By this time we were ready to find our hotel and have a rest, so we didn’t pay to look inside.

In the late afternoon we headed out to explore the town. Montepulciano is quite a big place, with the old town stretching along the top of a ridge. In contrast to most of the small villages we have visited, this town is definitely on the tourist circuit, and there are hundreds of souvineer shops, wine and cheese merchants and restaurants.

At the eastern end of town we visited the Palazzo Comunale (town hall) and paid a few euro to climb to the top of the clock tower. From there we had amazing views over the surrounding countryside, including a few of the towns we have walked through.

Our next visit was to the Palazzo Ricci. In the cellar is the familiy’s “Cathedral of wine” where they store huge barrels of their products while they mature. The cellars are absolutely enormous, and extend down multiple levels to the base of the cliff. Right at the very bottom are some Etruscan tombs in what looks like a natural cave. We tried to take photographs, but our camera isn’t really up to it. The link above gives a better impression of what it’s like.

We subsequently discovered that quite a few wine shops have huge cellars underneath, and their own Etruscan tombs. With thousands of bottles and hundreds of barrels of valuable wine in storage it would have made sense to have these facilities inside the city walls. There are lots of churches and they are all filled with fantastic artwork from the middle ages.

There is a Bottega (restaurant) just down the street that our guide recommended, and it is in the cellar of yet another wine merchant. We sampled a bottle of the famous Vino Noble di Montepulciano with dinner under a brick arched ceiling.

2 thoughts on “Pienza to Montepulciano”