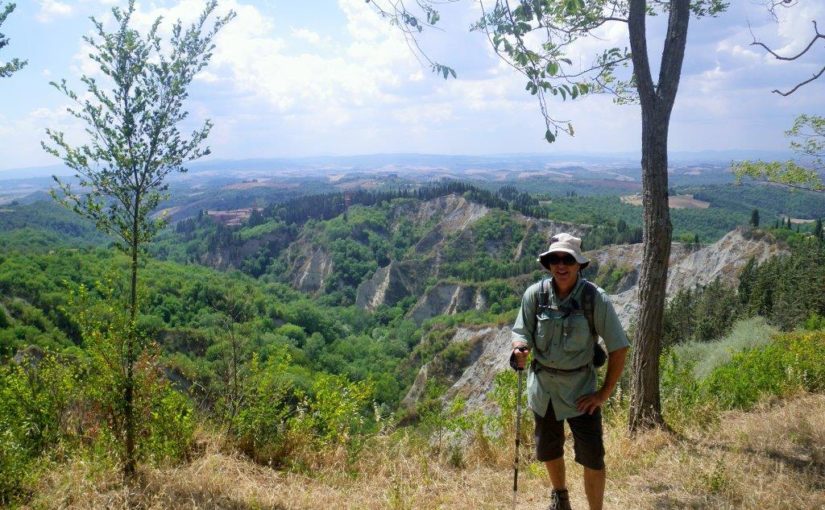 We had a leisurely start to the day today since our train didn’t depart until just after 11.00 am and the station was only a few minutes walk from the hotel. We ate breakfast looking out over the magnificent cathedral dome, which turned out to be just a couple of rooftops away.

The train to Sienna was crowded and we didn’t have seats booked, so it was fortunate we were early because some poor tourists had to make the trip in the non-air conditioned space at the end of the carriage. There was a lot of security at the station, with an armoured vehicle parked in the entrance and pairs of soldiers with machine guns accompanying pairs of police.

At Sienna we transferred to a small local train with only one carriage and about half a dozen other passengers. We passed vast fields of sunflowers and hundreds of round bales of hay waiting to be stored for the winter. About 2.00 pm we arrived at Buonconvento and were met by our tour organiser. He loaded us and our gear into his van and drove us into the hills to start our walk.

Abbazia di Monte Oliveto Magiore is an abbey that was founded in the late 1400s by a successful Sienese banker named John Tolomei. He became a hermit and took the name Bernardo. There are supposed to be some artistic masterpieces inside the abbey, but it was closed for lunch and we didn’t want to wait for it to open mid-afternoon.

The village of Chiusure sits on top of a hill with panoramic views of the surrounding countryside. The road through the centre is very narrow, and only small vehicles could drive through. There was a water fountain in the piazza where Felicity filled up her water supply, and I drank as much as I could knowing it was going to be a hot day.

We have been warned to watch out for vipers, which are poisonous, but the only wildlife of note has been some medium sized skinks with attractive black markings on their green backs.

For quite a while our route followed metal roads, which while we encountered no traffic we were out in the hot sun and it became a bit of an ordeal. When we turned off and started down a road through the forest it was much more pleasant. There are supposed to be truffles growing under the oak trees in this vicinity, but you need a trained dog or pig to sniff them out. Because we are not going to have cooking facilities until we get home there seemed no point in digging randomly.

We passed an abandoned and derelict house on the edge of the forest. I have been surprised by how many derelict buildings I have seen in Italy, including some medium sized factory complexes. The final stretch was across some farmland and down into a steep valley, which meant we had to climb an equally steep hill up the other side.

At the top, we arrived at Agriturismo Pieve a Salti, Podere Caprili, where we are staying for the night. Although we selected the non luxury accommodation option, this place exceeded our expectations by several degrees. It was obviously once the homestead of a wealthy estate. They have been organic since the 1990s, and grow wheat, other grains, beans, olives and grapes.

Our room is huge, with great views over the Tuscan countryside, and even better there is a large swimming pool which is just what we felt like after a hot afternoon. We have just returned from an excellent dinner on an outside terrace, watching the sun slowly setting over the distant hills. The vino della casa is not bad, and quite cheap.

2 thoughts on “Monte Oliveto to Buonconvento”