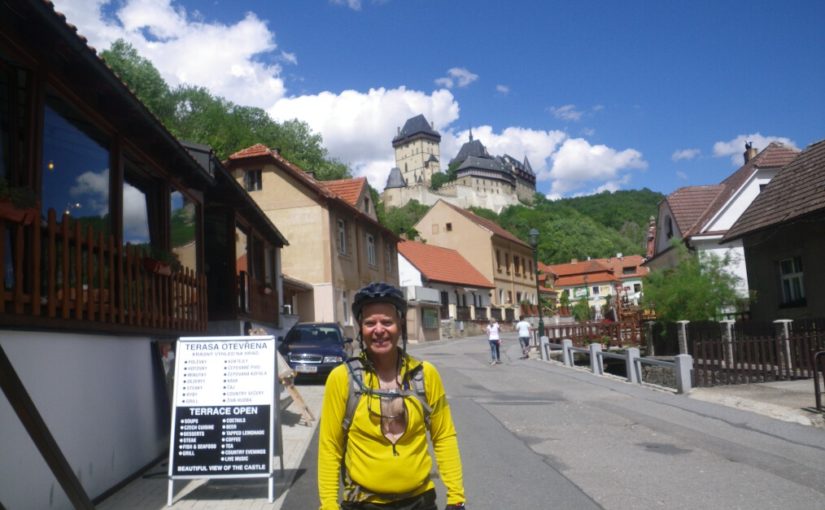 When I looked out the window this morning the sky was blue and the sun was shining – ideal conditions for a bike ride. After breakfast I walked over to the Holiday Inn to meet up with Barry, and discovered a coffee shop just around the corner that makes an excellent brew – an auspicious start to the day.

I had Googled a walking route through the Vysehrad Fort complex to the Biko bike hire shop that looked fairly complicated, but it turned out to be quite straightforward and we were there by about 9.45. Unfortunately several other customers had arrived before us so it was 10.30 before we were kitted out and riding down the road towards the river.

I had intended to just head downstream until we started getting tired and return the same way, but the helpful young guy in the shop suggested that we ride 35 km southwest to Karlštejn Castle then catch a train back. This seemed like a good plan, so we followed the A2 bike path down as far as Komorany, then crossed both the Vtlava river and the Berounka River on an amazing blue steel structure slung underneath a concrete motorway bridge.

We rode alongside the Berounka to the town of Cernosice where we stopped for lunch, then crossed the river and continued till we were opposite Dobrichovice. At this point we should have crossed back, but an attractive gravel road lead us astray for several kilometers, up and down several steepish hills until we came to a section that was badly flooded by yesterday’s rain. There was no option except to ride all the way back to the previous bridge, and continue along the north bank of the river.

A whole bunch of dark clouds had gathered menacingly in the sky, and it began to rain heavily in the hills near us. Fortunately we were on the edge of the storm, so we only got slightly damp instead of soaked.

After the town of Lety the bike path seemed to disappear, so we ended up on a county road which climbed up high into the hills before descending to Rovina back at river level. It wasn’t too far from there that we found the town of Karlštejn, which was heaving with tourists, most of whom had come by bus or train.

We didn’t see any sign of the castle until we climbed up a small side road that soon became lined with restaurants and souvineer shops. Up high on a ridge in front of us was the castle we had come to see. I rode up to near the entrance, but I didn’t feel like spending a whole lot of money to look inside, and in any case we hadn’t bought locks for the bikes.

Karlštejn is a Gothic castle built in 1348 by Charles IV, the King of Bohemia. The steep cliffs around it made it difficult for anyone to mount a conventional assault, but in 1422 Hussite attackers used catapults to throw dead bodies and 2000 carriage-loads of dung over the walls, spreading infection among the defenders.

Both Barry and I were pretty tired by this time, having ridden well over 40 km, so we were glad to have the option of a train ride back to town. At first I was a bit worried when I saw that main Prague station was on the opposite side of the Old Town from the bike shop, but at the Praha-Smichov station we realised that we were just across the river from our destination so we quickly jumped off there and were able to cross on a railway bridge which ended a few hundred meters from the bike shop.

This is a great ride if you only have one chance to spend a day on a bike around Prague. There are other paths in all directions, and I could happily return and spend more time here.