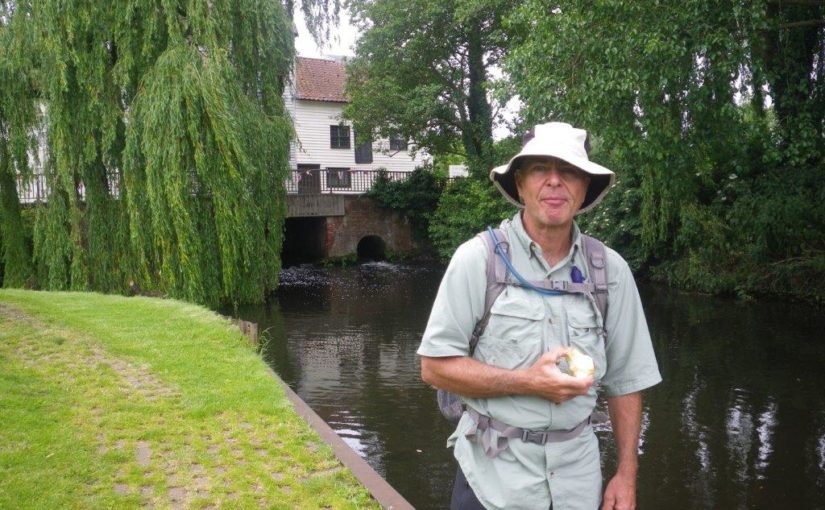 Today we completed the final section of the Wherryman’s Way, so we have now walked the whole distance from Norwich to Great Yarmouth. We started by catching the midday bus to Chedgrave, and disembarked outside the White Horse Pub where we had ended our walk on our previous visit.


As we hadn’t walked beside the River Chet last time we backtracked slightly, and walked to where the original Way is blocked and a diversion along the road starts. One of the frustrating aspects of this walk has been that the map, while graphically attractive, has often failed to align with the actual route, which makes it pretty useless for navigation.

I was interested to learn that in the 1800s the river was made wider and deeper by navvies digging out the mud by hand. This allows boats to get up to the nearby town of Lodden, which was where the original ford was situated.

When the area was first inhabited, sea levels were much higher and the low lying areas were all under water. Around 700 AD the river levels fell, encouraging farmers to use the fertile soil left behind. In the middle ages there was another period of high sea levels which then receded again a few hundred years later.

We sat on a bench in a boatyard to eat lunch, then walked up through the town. Where we crossed the river an old mill is still situated right on top, with the water flowing out underneath.

One of the buildings we passed was once a factory for producing malt from locally harvested barley. Traditionally, the malt was sent to Scotland to make whiskey, but a distillery in Norfolk began production in 2006. While there was whiskey made in England up until the beginning of the 20th century, almost 100 years went by when it all came from north of the border.

The Way has lots of markers, but often they are missing at crucial intersections, so we ended up on the road for a short time before finding it again. At one point a sign pointed diagonally across a field of ripening grain, and it was only because a small additional notice assured us that yes, it is a public right-of-way, that we walked across.

The small, thatched roof church of St Gregory caught our attention, so we stopped to look inside. The oldest parts of the building including the lower round section of the tower date back to Norman times (11th century), but there were significant extensions in the 13th and 14th Century. The wooden wheeled bier used to carry coffins in funeral processions dates from the 19th century.

We alternated between sections of narrow country roads, small lanes and a few footpaths until we finally arrived at the Reedham Chain Ferry. The driver controls two winches on either side of the boat to pull the ferry across the river without getting carried downstream by the current. There is enough slack in each chain for it to drop to the bottom of the river when the ferry is docked, allowing boats to pass backwards and forwards. The fare was just NZ 90 cents each because we waited for a car to accompany us.