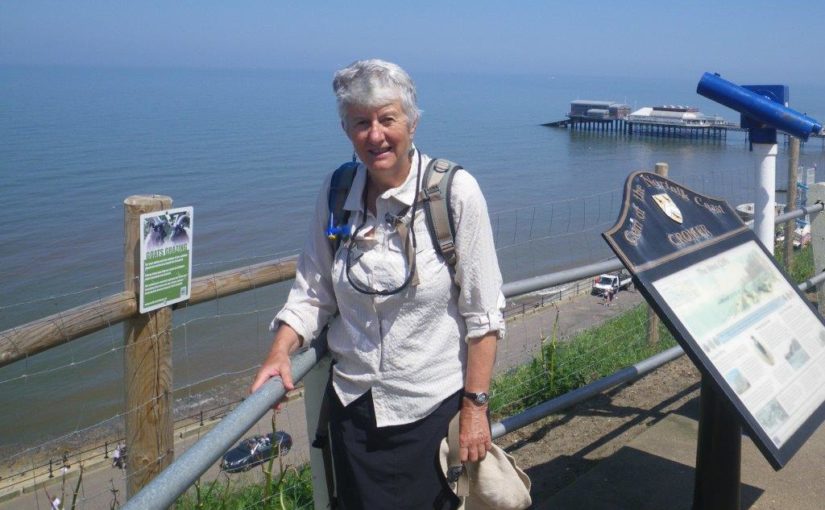 It’s been a stinking hot day here in Norfolk today, so we’ve been to the beach. It was hot enough to swim, but finding somewhere to get changed and keep our bags safe seemed a bit complicated, so we gave it a miss and concentrated on sightseeing.


Last time we were in Sheringham we walked west along the Norfolk Coastal Path, so this time we headed east. For the first few kilometers we were behind massive walls built to stop the North Sea from eroding the cliffs, but as we got further away from town they became increasingly derelict and eventually stopped. When we came to a set of wooden steps leading up to one of the many campgrounds along this coast, we climbed up and continued along the cliff top for the rest of the way.

At West Runton Beach we found a shelter with seats, which was a comfortable place to eat lunch out of the sun. The next section of the coastal path had dropped into the sea in a couple of areas, so we had to detour inland through campgrounds and even along the road in places.

Cromer is a popular sea-side resort, mostly developed by wealthy Victorians in the 19th Century, although there has probably been a town of that name since the 14th Century. Besides tourism, the town has a thriving fishing industry, mostly concentrating on lobster and crabs.

I was interested to learn that a thousand years ago the coastline was much further out than it is today, and about half a kilometer beyond the end of the pier is the site of the lost village of Shipden. In 1888 a steamer passing by at low tide hit what is believed to be the top of the stone church tower, which had to be dynamited before the ship could be pulled loose. Locals reckon that during big storms they can hear the church bells tolling from beneath the waves.

There has been a jetty of some kind at Cromer since the end of the 14th century, but winter storms have regularly destroyed these structures. In 1822 a cast iron wharf was built in the hope that it would be more durable, but this only lasted 24 years. It was replaced by another wooden jetty, but this too was destroyed in 1897. The current pier was built in 1902, and is claimed to be the first recorded use of the description “pier”. A huge storm surge in 2013 did a lot of damage to both the pier and the rest of the waterfront area, but it has been able to be repaired. During our visit the sea was calm enough for tourists to be paddling by in kayaks, so we were in no danger.

At the end of the pier is a lifeboat station, and we were able to go in to inspect the Tamar class Lester. This is an amazing boat, built to handle almost any sea conditions. Once the crew are on board and strapped in, the cradle it sits on is tipped up, a hook is detached and the ship zooms down the slipway into the sea. The boat has two 1000 horsepower Caterpillar diesel engines capable of towing large ships away from danger if necessary. There has been a lifeboat at Cromer for over 200 years, and there have been hundreds of successful rescues.

Our next stop was the 14th century Church of St Peter and St Paul. This has the highest bell tower in the country at nearly 50 meters. We were able to climb up a spiral stone staircase to admire the spectacular view up and down the coast. I was impressed by the series of brick arches holding everything together.

I had one final thing on my agenda for the day and that was to eat a dressed Cromer Crab. At $7.00 each they aren’t exactly cheap, but the fact that someone has skillfully removed all the meat from the legs, claws and body then carefully arranged it back in the shell means that we could eat them with a plastic fork siting on a bench at the bus station without getting covered in crab juice.

My regular readers will have noticed that I didn’t post a blog on Friday. This is because we were invited to an evening garden party at a farm on the outskirts of Norwich and I was introduced to the delights of Prosecco, an Italian bubbly which supposedly re-creates a wine praised by Pliny the Elder in the first century AD. The first recorded use of the name Prosecco was by an English visitor in 1593. Let’s just say I was in no fit state to write a blog when we got home!

In the afternoon we had enjoyed a tour around Norwich Cathedral with a guide who pointed out dozens of small details that we would never have noticed on our own. I was interested to learn that when the 140 meter long building was nearing completion in 1145 after fifty years of construction, it was discovered that one wall was about a foot higher than the other! Whether it was because the foundations had sunk over the decades or that the person setting up the original string-lines wasn’t on the ball, they have had to live with it ever since.

Th main structure is faced with French limestone, and we were shown that some of it has been turned pink from extreme heat generated by fires over the centuries. The cathedral was badly damaged by riots in 1272, and again by angry Puritans in 1643 who destroyed all the Catholic symbols, and left musket balls embedded in the stonework.

As we were leaving, we stopped to check the Peregrine Falcon nest high up on the cathedral spire. We were told that the chick had just learned to fly and was away from the nest. Just at that moment the male (technically known as a teircel), appeared and landed on the nest, so we were able to admire it through the telescopes set up by the Hawk and Owl Trust. Peregrines mostly catch flying birds like pigeons, and can reach nearly 200 km/hour when diving on their prey!

2 thoughts on “Sheringham to Cromer”