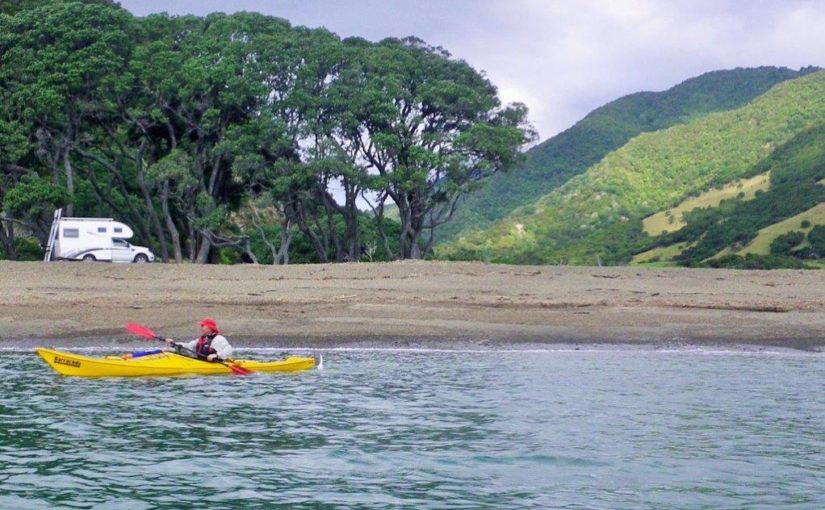 We had intended to camp just past Te Kaha, but before we arrived there we spotted some campervans and a bus down on Maraehako beach, and a small sign advertising a private camping ground. When we realised how beautiful the place was, we decided to spend $15.00 each and stay. It turned out to be money well spent – this is one of the best coastal kayaking destinations we have been to.


There is a big grass area, but we drove all the way down under a grove of pohutukawa trees and parked on the gravel shore, about 10 meters from the sea. The beach must be facing west, because the sun is currently setting over the sea out of our motorhome window, and it is almost equinox. Out on the horizon I can see White Island, with just a small puff of smoke erupting at the moment.

We tried to walk around the coast to explore a small private beach just to the north of ours. We climbed around the rocks for a while, but eventually came to a cliff where we would have had to swim to continue.

Felicity suggested we go back, unload the kayaks and paddle around. I was a bit reluctant at first, because I had been thinking it was time to take things easy after our active morning. Then I looked at the glassy calm sea, and the clear sky, and realised it was too good an opportunity to miss. We still had our original plan of kayaking the next morning, but it was possible the weather might deteriorate overnight.

There were lots of sea caves to explore. I let myself drift quite a long way into one narrow, low roofed cave, listening to the unusual echoing noise of waves breaking at the end. Then I looked at the jagged rocky roof not far from my head, and thought about the effect of even a slightly bigger wave, let alone a tsunami. It was time to leave!

One cave went all the way through the headland, and we could get a tantalising glimpse of the coast further south.

Just beyond that was a narrow channel and we realised that what we had assumed was part of the headland was in fact an island. The next bay had another deep channel leading to a sheltered pool against the cliff, with a concrete boat ramp and a landing.

We paddled back around the outside of the island. Away from shelter, the swell was quite big, so it was good to get around the corner and back into calmer water. Our short paddle had ended up being over an hour and a half.

The hot showers at the camp had to be paid with by coins, so we decided to rinse off in the river instead. Although there was quite a good flow of water, we couldn’t find any deep pools, so I had to lie on my back in the middle of the channel to get mostly covered.

Next morning we were up early and launching our boats about 7.30am. This time we went south. The headlands had similar channels creating small islands, but none of them was big enough to paddle through. We found caves to paddle into, and reefs to explore.

At the far end of the next bay, we had a peek around the point then headed straight back into the sun towards our own bay. Again we chose to be outside the outer reefs in the open ocean, bobbing up and down in the gentle swell. I knew that as long as we stayed well clear of rocks, there was not much danger.

We had just turned towards the beach when I got a bunch of text messages. There is almost no cellphone reception along this coast, so mostly my phone is off. I had it turned on to take photos, and must have been far enough out to come within coverage of a cell tower somewhere. It was my mum testing her new phone, so I sent a reply.