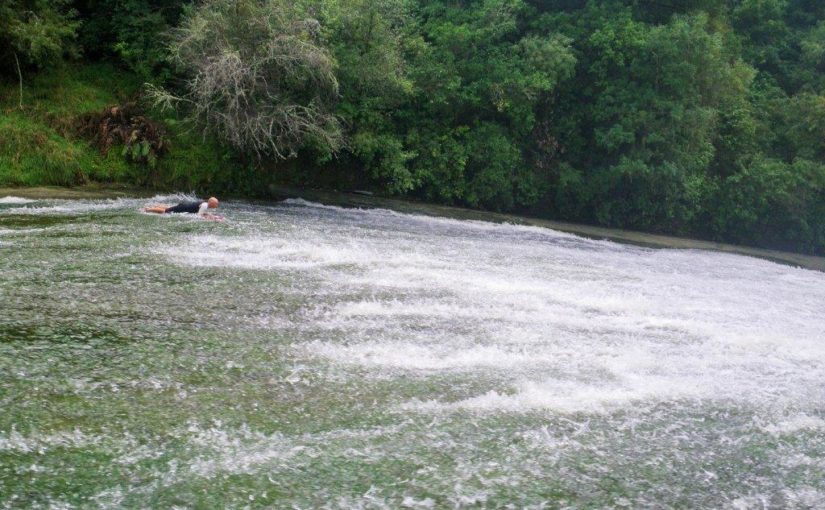 It rained overnight at Morere Springs, but the sun was shining again by morning. We decided to hike the Mangakawa Track which climbs high above the hot pools before following the Mangakawa Stream back to the springs.


DOC has put a lot of effort into upgrading this track recently. There are hundreds of new wooden steps which we appreciated in the damp conditions underfoot. It passes through virgin rainforest with lots of birds look at.

Some of the rocky ledges along the river were a bit slippery, and near the end a huge slip involved a bit of careful rock-hopping.

A few hundred meters above the main spring, we saw a pool in the river with a pipe taking water downstream, and lots of bubbles breaking the surface. Thinking we might get a free, natural hot swim, we stripped off our clothes and headed for the water. I immediately sank in soft mud up over my knees, and concerned that I might get stuck, I quickly retreated to firmer ground. It would have been embarrassing enough having to be rescued at all, without the humiliation of being stark naked as well.

Upstream a bit I could see a hard, sandy bottom leading to a patch of water weed, so I entered the pool in that direction. There was a small amount of luke-warm water on the surface, but it seems most of the bubbles are caused by gas rather than hot water, so I didn’t linger.

A bit further down we came to the main spring, which used to be a natural rock hot pool with a split totara changing shed. After it got destroyed in a big flood, the bathing pool was moved to a safer spot downstream and the hot water piped down.

We drove back to Gisborne and made another visit to the supermarket before parking for the night at a campground overlooking the entrance to the port. By this time we had a lot of dirty laundry, so we needed access to washing machines and dryers.

Felicity had a tele-conference booked, so I decided to go for a bike ride. There is a new cycleway down the coast behind Waikanae Beach, so I rode to the end then continued along the quiet Centenial Marine Drive until it became 100 Km/hr then turned around.

The new cycleway continues inland, then follows Waikanae creek back to the central city. I rode past the motorhome and around the corner of the Waimata River to the wharf before heading for home.

By the time we finished coffee it was after 6.00pm, but the sun was still shining so we nipped down to the beach for a swim. The waves were quite big, but I didn’t manage to body surf on any of them.

After breakfast next morning, we drove into the hills to check out the Rere Rockslide. I pulled into a carpark at Rere Falls, but they didn’t look like the kind of waterfall you would go over casually. There has been a fair bit of rain, so the water level is significant.

Felicity remembered a sign at the gate saying the rockslide was 2km, and when we looked closely it turned out to be pointing up the road. There were other people leaving the rockslide just as we arrived, but by the time we got into our wetsuits we were on our own. There were lots of dead and dying boogie boards scattered about, so we grabbed ourselves the most intact ones.

The rockslide is wide, with plenty of water, but it was a bit scary to know where to launch down without seeing anyone else do it. I encouraged Felicity to go first to see if it was safe, but she refused. Across the face in a couple of places a diagonal ridge was creating a small standing wave.

To lie down on my board was going to be total commitment, because there was clearly going to be no opportunity for second thoughts. I forced myself to do it, and was suddenly rushing down at tremendous speed. I hit the pool at the bottom with my face, and couldn’t avoid a mouthful. The river runs through farmland, and the water quality is not good, so I hope there are no consequences.

The bottom of the falls is still steep, slippery rock, so there was no possibility of walking. The current pushed me away too, so it took an effort to swim over to the side where I could get out.

Felicity nearly wimped out, but earlier in the morning she had talked to her boss on the phone as we drove and discussed the rockslide, so she didn’t want to look like a wuss. She slid down like a pro, and didn’t run into any trouble until hitting her head with the board as she smashed into the pool.

My second run didn’t go so well. I hit one of the standing waves and went sideways, and continued sideways all the way to the bottom, which meant I got a few bumps om my shoulder and knees. The third time I picked the right path, and was able to enjoy the ride.

We were sitting inside eating lunch when another couple turned up, and went straight to the line on the far side that had worked for me. Then they got out on the same side, and were back at the top in a few seconds, instead of fighting their way across the current to the more obvious bank.

On the way back towards Gisborne, we stopped at the Eastwoodhill National Arboretum of NZ. Felicity and I visited here back in 1987, and I remember being impressed then. Members of the Motor Caravan Association can park here overnight for $10, so we are currently at the back of their car park.

Eastwoodhill was founded by Douglas Cook in 1910, but a sign suggested that the first exotic trees were planted back in 1885. The next owner Bill Williams purchased the property in 1965 with the aim of protecting it permanently as a park.

Now there are over 30,000 different species planted here. In the late 1940s, with the possibility of nuclear war looming, Cook planted as many different types of northern hemisphere trees as he could find. Now it is one of the best collections in the world, which could be important if disease or other disaster strikes.

Following the Extended Purple Walk, we spent well over two hours climbing up into the hills at the back of the property. At the top is the Plane Table Lookout on Arataitai Hill, where a stainless steel panel shows all the mountain peaks on the horizon, and tells how the ridge it is on was part of a traditional Maori path towards Rere.

With so many different types of tree, it didn’t look like much we were in New Zealand, but it didn’t look much like anywhere else either. One small grove on close inspection turned out to be chestnut trees, with hundreds of nuts littering the ground. A small bag came home with us.

2 thoughts on “Gisborne and Rere”