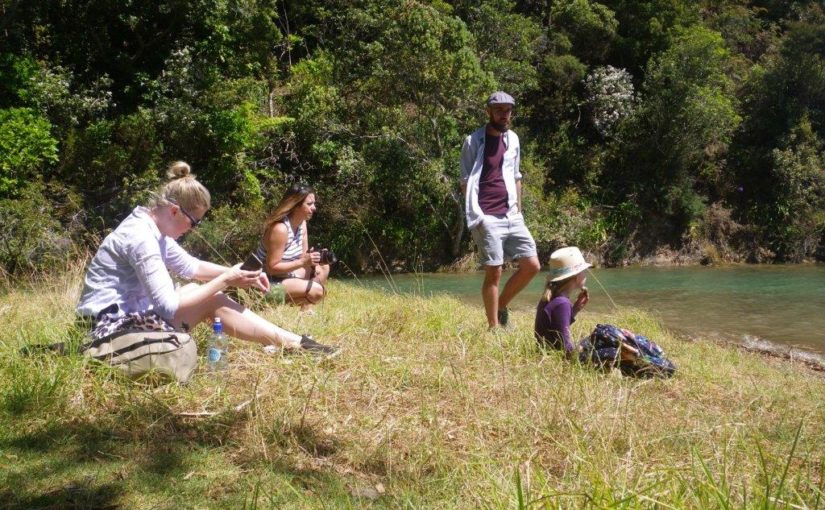 The English branch of the Potter family is visiting NZ this Christmas, so we took the opportunity to spend a couple of days with them in Kerikeri.


Felicity and I left Auckland on Friday morning, and by the time we reached Whangarei we were ready for lunch, which we hoped to follow with a bit of a hike somewhere. I remembered our recent stop at Ruapekapeka and that we intended to return and explore, so we headed there and ate lunch in the carpark. Just as well, because a sign at the start of the path warned us that the pa site was tapu ground, and that we should respect it by not eating or drinking there.

We walked around a lovely bush track from the carpark, then crossed a road and came to a carved wooden gateway. This was a fighting pa, defended by about 400 Ngapuhi warriors against more than a thousand British troops and about 500 Maori supporters.

Led by chiefs Hone Heke and Te Ruki Kawhiti, the Ngapuhi felt that their rights guaranteed under the treaty of Waitangi were being abused by the colonial government. This led to a series of armed clashes in 1845-6, the last of which was at Ruapekapeka.

Heke and Kawhiti had studied British tactics carefully, and the site is an impressive maze of trenches, tunnels and bunkers. The name of the pa translates as “The Bat’s Nest”, because Kawhiti and his men sheltered in dark underground caverns, like a colony of bats.

The British had to bombard the pa with cannon and mortars for over twelve days before they finally breached the defences and captured the hill-top area. It wasn’t much of a victory, because most of the defending warriors had sneaked out the back and disappeared into the bush.

British military engineers were so impressed by the fortifications that they sent two teams to inspect them, and built a scale model to educate their own troops. The plans were even tabled in the UK House of Commons.

At the top of the hill is a huge red pou whenua, carved from a totara log that came from the nearby forest. We carried on a bit further along a track that lead to a grove of enormous puriri.

Ben and Kelly had rented a house just across the Kerikeri river from the Stone Store, so after a quick dip in the river we parked in their driveway and joined them for dinner.

On Saturday we packed a picnic lunch and drove south to walk some of the Paihia to Opua Coastal Walkway. This pathway along the edge of the harbour is very scenic, and our visitors seemed to enjoy themselves. At Opua most of us went for a swim, then we all ate lunch in the shade of a pohutukawa tree.

Some of the group were rather tired by this point, so they waited at Opua while the rest of us walked back to get the cars. Nicolle set a cracking pace, and it seemed like we were back at the start of the track in no time.

Felicity and I stopped at Paihia beach for another swim, then headed for home via an orchard/garden where we purchased the first of this season’s sweetcorn, some purple Maori potatoes, and a bag of yellow scallopini marrows to add to the evening’s barbeque.

We enjoyed a fairly slow start to Sunday, because the rest of the family was preparing to head out on a boat to hunt dolphins and whales. After we said goodbye, we drove back through Paihia to visit Felicity’s cousin on the way home.

After about 45 minutes more driving, we decided to stop for lunch at the Waro Limestone Scenic Reserve, which is an area of spectacular karst limestone formations just north of Hikurangi. We ate our food, then walked around the walkway circuit admiring the rocks. “Waro” is the Maori word for coal, which was the main industry in the Hikurangi area during the first half of the 20th century.

Around the back we discovered Lake Waro, which is actually an old quarry filled with water. Since our last visit decades ago, the Yvonne Stewart Memorial Walkway has been completed right around the lake, so we took the opportunity to circumnavigate.

One thought on “Bay of Islands with the Brits”