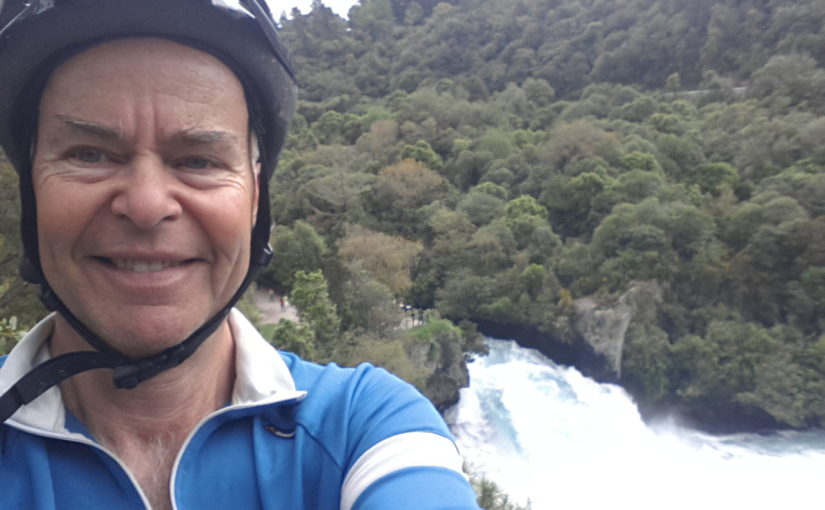 Taupo has several bike shops clustered together in one of the main streets, so I wasn’t too concerned when Torpedo 7, who normally do my bike servicing, told me their mechanic wouldn’t be able to replace my tyre until Sunday. When Top Gear Cycles next door told me they didn’t have any 26 inch mountain bike tyres, I did start to wonder if I would have to drive to Rotorua. Fortunately Pack and Pedal down the road had both stock and someone who could fit it for me.


I hung out by the lake for the rest of the morning, catching up on email and even doing a bit of work. When I got the bike back after lunch I was keen to test out the new tyre, so I headed to Spa Park where I had enviously watched bikers riding on the riverside track to Huka Falls last time I was in Taupo.

This is a very fine track, especially the one-way sections where you don’t have to worry about oncoming traffic. A couple of times on the two-way sections I was surprised on blind corners and only just managed to stop in time. When I reached Huka Falls I was enjoying the ride so much that I decided to do an extra 15 km loop to the Aratiatia Dam.

On the way back I had to stop suddenly to avoid a German woman who was standing with her bike just around a blind corner. She was a bit traumatised because she had seen a baby stoat on the side of the track, and knowing they were a pest had deliberately swerved and run it over! I was very impressed and told her she deserved a medal, and had done a fine public service, which I hope made her feel better. It actually wasn’t quite dead, so I found a heavy stick and put it out of it’s misery.

During a stop for refreshments at a scenic spot just past the Hub Kitchen, I tried to take a photograph of the Huka Jet tourist boat (it is at the front of a big shower of spray and almost invisible). I then set off on a very exciting singletrack which lead all the way down to river level far below.

I was hoping to stay on the western side of the Waikato all the way to Huka Falls, but to my annoyance I found that the track was closed, so I had to ride all the way back downstream to the new highway bridge and cross to rejoin the eastern bank track.

As soon as I had the bike loaded on the rack I changed into my swimming shorts and walked down to the hot river for a soak. I particularly enjoyed a shoulder massage from the hot waterfall.

The Campermate app told me that the nearest free campsite was it Five Mile Bay, out past the airport, so I drove out there and managed to score one of the last spots on the lake edge. This is a popular park up place for self-contained vehicles.

It rained overnight, and was still raining in the morning, so I spent my time catching up on this blog. By midday the rain had mostly stopped, and as I had been noticing dozens of cyclists passing the motorhome on a lakeside path I decided to forego a rest day and join them.

It was very relaxing riding on a flat, mostly concrete path, so when I got back to the vehicle I decided to go a few kilometres in the other direction towards town. There are lots of kowhai flowering along the edge of the lake, and lots of other bright wild flowers, so it was all very pretty.

I dropped in to see my nephew and his wife, who have been feeling a bit lonely since they moved to Taupo, but their house was filled with friends from Auckland so I only stayed an hour or so. Now I am back at Five Mile Bay.

One thought on “Taupo Tyre Repair”