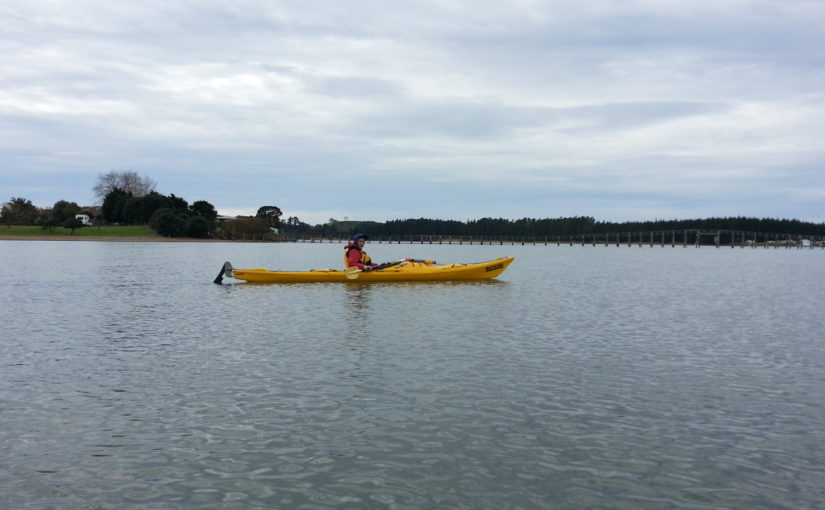 When I woke up this morning I could hear light rain falling on the motorhome roof, but Felicity leapt into action and soon after 7.30 I was outside in my raincoat getting the kayaks ready to launch. Fortunately the clouds cleared and by the time we hit the water the sun was beginning to peek through.


We headed up a channel through the mangroves pretty much due west, and eventually passed under the Hailes Rd bridge. The creek was getting quite narrow by this time, and we only got about half a kilometer before the way was blocked by a fallen tree. Even though they are probably an invasive weed, there was a nice display of arum lilies along the stream bank.

Back down at the main estuary we turned north up Taupari Stream and followed that as far as we could – a kilometre or so past the highway bridge that we had crossed in the camper on our way in. There were several wrecked boats to look at, and a number of dilapidated huts and houses.

We saw lots of bird-life, but the most exciting were families of rare pateke or brown teal. Felicity tried to get a photograph but the ducklings were very quick at hiding themselves in the long grass at the edge of the water. The little trail you can see near the bank is the result of a duckling almost running along the surface of the water.

When a tiny pateke got separated from the rest of the family, one of the parents bravely rushed directly at us. I’m not sure whether it intended to be threatening, or if it was just creating a distraction.

The kowhai trees up here are starting to bloom, so spring has definitely arrived. I haven’t noticed any in Auckland yet, but it presumably won’t be long.

We had been on the water for over three hours by the time we arrived back at the Whananaki Campground, beside the longest footbridge in the southern hemisphere. Felicity went to have a shower, while I learned that it is not possible to load the kayaks onto the roof if the ground slopes away from the back of the vehical – I am too short to lift the rack high enough to slide it forward. Fortunately nobody was watching my struggle! In the end I had to drive the van to a flatter piece of ground.

On our way north we stopped at Kawa Kawa for lunch, and got to watch the vintage steam train go past. It only had a couple of tourists, so it must be a marginal operation at this time of year.

We had neglected to pack any cheese when we left home, so when I spotted the sign for Mahoe Farmhouse Cheese we called in to do a bit of shopping. The man behind the counter gave us a taste of very special 3-year-old Gouda with cumin seeds, which I thought was a bit of a waste of good cheese, even though I don’t mind the taste of cumin in a curry.

Our final stop for the day was at our friends Rex & Valerie Hunton’s house in Keri Keri. It is always good to catch up with them to gossip about mutual acquaintances, hear about their interesting lives, and admire Valerie’s amazing artwork.

We considered driving a bit further north, but ended up just around the corner at the NZMCA property. Here we can listen to the sound the Keri Keri waterfall from where we are parked for the night, which is very pleasant.

One thought on “Whananaki Inlet”