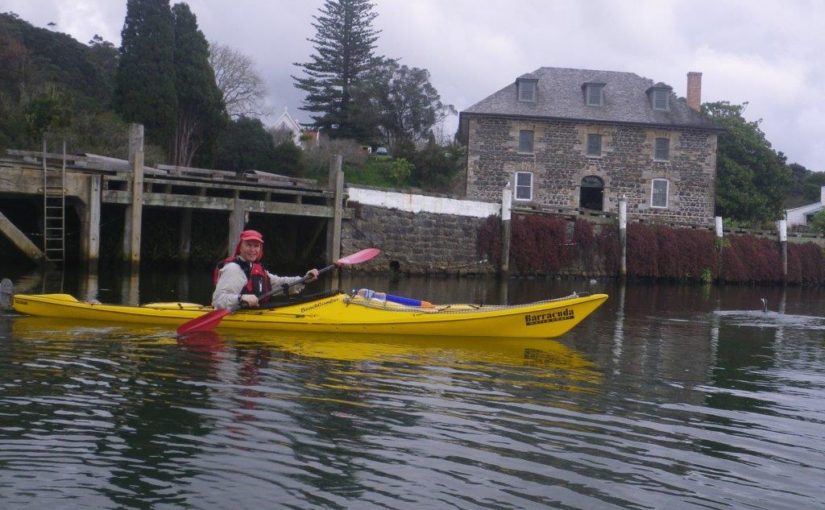 I had parked the motorhome on some very soft grass at Rainbow Falls, so I turned on the 4WD for a hundred metres or so as we were leaving this morning. I expect most of the time I do it will only be to park right on the edges of rivers and beaches and lakes where you wouldn’t quite trust a two wheel drive vehicle.


Just down the road, the Waipapa Stream Landing had a nice concrete boat ramp where it was easy to launch the kayaks. I’m already quicker getting them unloaded and re-loaded than I was with the old van. Our sliding racks are going to be well worth the expense.

We paddled down the stream and turned up the Keri Keri river. There were heaps of kowhai flowering, and lots of golden blossoms floating on the still water. There were also lots of pururi flowers, and on many of the hillsides a flowering cherry that is obviously an invader but still very pretty. I’ve just read that the Regional Council considers them invasive trees that pose risk to bush and birds.

As usual in this kind of environment, there were lots of birds – dozens of tui in the flowering trees, and flocks of shags, gulls and ducks. Just past the Stone Store, we heard a loud honking from the mangroves and out swam a goose.

We must have arrived right on high tide, because we were able to paddle right over what is usually a small waterfall. There was another section of whitewater a couple of hundred metres further on, which we didn’t try and paddle through.

On the way back down, we explored up the little channel on the south side of the Kororipo Pa site, and found a wooden bridge that is on a DOC track we have not yet explored. It is now on our list. We noticed an interesting riverside development called Pagoda Lodge that has tourist accomodation in caravans, containers and permenant safari tents.

A bit further on we passed a small island that has a tiny hut, and a flying fox connecting it to the river bank. We watched an African guy and a woman sliding across. Another African kid then pulled over a raft floating on blue oil drums.

Felicity noticed some large pink flowers on the bank and said they looked like orchids. I went closer to check and sure enough they were, although certainly not a native variety.

The wind was starting to pick up a bit as we headed back to the Waipapa Stream, but it wasn’t long before we were back at the boat ramp. We were loaded and ready to leave by midday, so we decided to drive south and stop somewhere scenic for lunch.

Our ciabatta buns were still in the freezer, so we stopped at the Kawa Kawa bakery to buy some fresh bread. When Felicity asked if they had any wholemeal the woman replied “I used to make a brown bread, but nobody around here eats it.”

We detoured off the road to stop at the Ruapekapeka Pa site for lunch. The averageness of the white bread was compensated by the excellence of the aged Edam cheese, so we were not dissatisfied. We had a quick look around before we left and discovered it is a fascinating place, with an interesting looking bush walk, for another occasion when we have more time.

The fine spring weather came to an end just south of Warkworth, and by the time I was unpacking the kayaks at home it was raining steadily. It is very pleasant driving a new vehicle with air conditioning and good windscreen wipers, even when the weather is bad. We have certainly come a long way up the comfort scale from the Series 1 Land Rover that we went for adventures in when my boys were young!