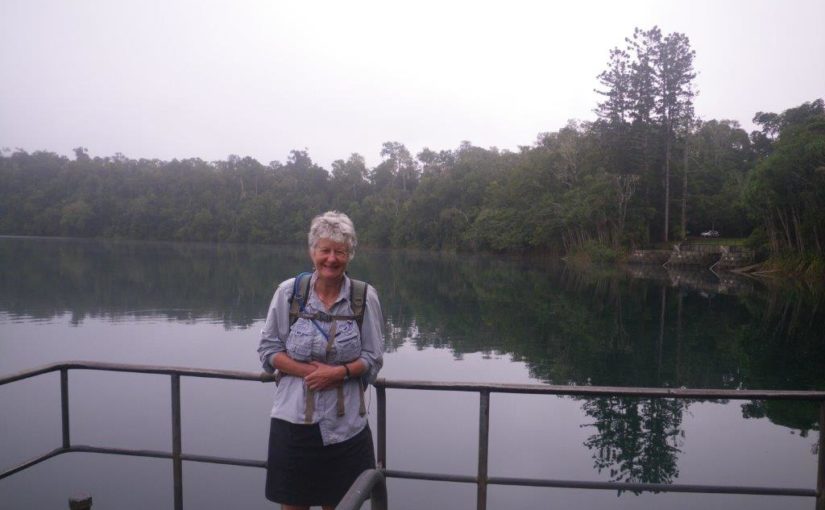 Dunkly’s Place must be one of the most unimaginatively designed and badly situated motels we have ever stayed in – not surprisingly it is up for sale. It did provide everything we needed for the night, and there are lots of interesting things to do in the neighbourhood, so I shouldn’t complain.


The first activity of the day was a stroll around Lake Eacham. This is an old volcanic crater that has filled with water. There are no creeks in or out – it is a closed system. The first thing we noticed is that there are several varieties of fish. A sign told us there used to be just three species in the lake, but when other Australian freshwater fish were introduced they all got gobbled up and are now extinct.

Around the first corner is a viewing platform where we could watch some of the saw-shell turtles swimming about. Our camera refuses to capture freshwater turtles from above the water, even though we could see them clearly.

There were a number of little signs with quotes from members of the indigenous tribe who’s traditional land we were walking on. Many of them were stories about the food sources surrounding us. The turtles must be speared in the head or leg, and taste “delicious”. Witchety grubs from rotten logs are good fried, but are usually eaten raw when out in the bush. Bush turkey eggs can be dug out of the top of the huge nest-mounds, broken into a ginger leaf then baked in the ashes: “mouth-watering”.

It took us a bit over an hour to circumnavigate the lake. We then drove north past Lake Barrine, which is also part of Crater Lakes National Park, and continued along a narrow dirt road to visit the Cathedral Fig Tree, which was very impressive. In between the huge buttress roots we could see piles of nuts stashed by kangaroo rats. There were a bunch of Australian Army troops waiting around the carpark, and I was a bit shocked at how many of them were smoking cigarettes.

A bit further up the road is a picnic area called “The Chimneys”. We thought we were going to see an interesting rock formation, but it turned out to be two ordinary brick chimneys side by side in a clearing in the bush. Many years ago there used to be a big house here, the owner of which must have considered fire-places to be a status symbol. Not worth driving several kilometres to see in my opinion, but about 100 metres further down the road there is a lookout over yet another lake, this one with unusual twin craters.

We drove back through the historic town of Yungaburra which has very few modern buildings and gives visitors a bit of feeling like stepping back in time. When you look closely you see trendy little boutiques, cafes and trinket stores for the tourists.

Just inland from the town is the Curtain Fig Tree, which is so famous that it has its own national park. It did the normal fig thing of sprouting in the crown of an existing tree, sending its roots down and strangling the host till it died. Then when the host fell over, it got hung up in the top of a neighbouring tree, which the fig proceeded to recruit into its world until it too died. Now the fig has reached a third giant tree for which the future is probably not good.

Even though we are in the tropics, and it was quite a long distance out of our way, we couldn’t resist visiting the Innot Hot Springs. This place was very famous a century or so ago due to the fact that the waters cure all sorts of illnesses. They even used to bottle the stuff and cart it by horse over the mountains to the coast where it was exported. You can pay the campground to use one of their concrete pools, but we preferred to use one of the natural pools dug out of the gravel at the side of the stream. The water was scaldingly hot, and it took us a while to find a spot where it was cool enough to sit in. We’ll probably live another ten years after our soak.

On the way to Millaa Millaa we had a choice of going via the highway or a small back-road though the “Misty Mountains”, so of course that is the way we went. It was, as advertised, misty. We had a moment of excitement when two emu streaked across the road in front of us. I was briefly tempted to bowl one and hack off a drumstick, but figured that taking a bloody, feather covered lump of protected animal meat into a communal kitchen probably wouldn’t be cool.

It was late afternoon by the time we reached the coast, and we were both starting to feel a bit sleepy so we stopped at a roadside cafe for a coffee. The barista had started making them before I realised we were getting organic coffee at $7.00 per cup. When I said to him that it is sometimes hard to find coffee in the late afternoon, he told me he sells it all day because it keeps the business afloat. It tasted extremely average.

Felicity had meanwhile visited a tiny butchers shop across the road, and came back clutching a pack of crocodile meat. Fried up with onion and garlic, it was a bit like eating slightly chewy chicken – quite nice but probably not worth paying a premium for. Still, I was glad to do my bit to re-assert humankind’s proper position at the top of the food chain.

One thought on “Lake Eacham”