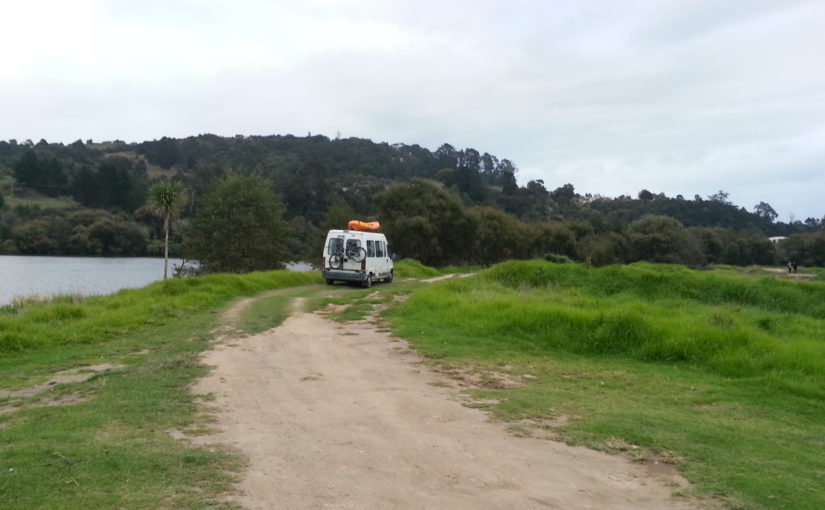 This weekend Felicity flew to Minneapolis for a meeting, and since I had to pick up a kayak in Hamilton, I decided to stay down in the Waikato and do some mountain-biking.


Due to a minor computer malfunction just as I was about to depart, I left home a bit later than I had planned. A long wait for a Pokeno Bacon Buttie at the cafe in Mercer (which was well worth it) meant that I couldn’t take the risk of getting lost while exploring the Hamilton mountain-bike trails so instead contented myself with a mostly road ride around Tamahere near where I was scheduled to meet the kayak guy.

The most interesting part of the ride was a footbridge that connects Tamahere with Maiangi, because I met a local mountain-biker and asked him where the best single-track in the area is. He told me that the top choices are the Waipa Mountain Bike Club tracks on Mt Pirongia, and the Te Miro MTB Club trails near Morrinsville.

By the time I got the kayak loaded on the roof it was getting dark, so I headed for the nearest free campsite at Lake Ngaroto, just north of Te Awamutu. I was just in time to enjoy the dusk as I sat on the jetty drinking a coffee. There were several cars parked when I arrived, but they left one by one and I had the spot to myself until the first runners arrived soon after dawn.

In the light of day I read a sign describing my surroundings. Ngaroto is the largest of the Waipa peat lakes. In the past it has been highly polluted, and surrounded by farmland and blackberry, but a big effort by the local community is turning it into a beautiful spot. Swimming might still be a bit dodgy, but it looks great to kayak on. There is a 90 minute walk around the edge, but my attention was caught by a note which mentioned it was recently upgraded for biking.

The ride took me about 40 minutes, including a couple of stops for photos. Some of it is boardwalked, including a long section through fragile kahikatea forest. I was interested to see the boardwalk was “floating” on wooden bearers, ie: not fixed to the ground. One of the kahikatea was laden with red berries so it is presumably pretty healthy. I ate a couple but they are still a few weeks off ripe.

Leaving my bike gear on, I followed Google’s navigation to Sainsbury Rd, just across the Waipa river from Pirongia township. When I saw the first trail entrance, a couple of kilometres below the carpark, I stopped the camper and rode the rest of the way up the hill. At the end of the 2-way “Home and Away” track I continued up an old forestry road to the top of the hill. I came down the grade 3 “Hard Labour” trail, which was so much fun that I immediately rode back up the hill and tried “The Sorcerer” (grade 4), which was even more exciting. I was starting to get tired and hungry by this time, so I continued down “Not so Easy” to “Easy As” then back on to “Home and Away” which turned out to be much more fun going down. I just had to keep reminding myself that I might meet someone coming slowly up!

I drove the van part of the way down the hill, and stopped for lunch on the side of the road where there was a great view of the South Waikato. The Campermate app showed a free camping area nearby, towards the north end of the park at the end of Corcoran Rd. The carpark was full with hiker’s vehicles when I arrived, so I parked up for a while beside the helipad below, which had more great views. I could see that the large gravel area right beside me is sometimes used by local youth to do doughnuts in their cars, so when dusk arrived I shifted to a nice spot in the carpark. I was woken by lots of loud bird song, which turned out to be a flock of magpies, but I’m not complaining.

Google took me on an interesting tour of minor country roads on my way north-east to Te Miro. The carpark there was also full, but I found a spot on the side of the road out of the traffic, and set off to explore the trails. This is a big network, and because I hadn’t looked at the map to make a plan I headed east down the first trail I saw, “Big Red”. This lead me on to “Two Timer”, a detour along “Bit on the Side”, then back to the carpark. From there I went along “PD Track” and “PD Extn” towards the main track network. At the top of the long, misleadingly named “Easy Up” track, I met a bunch of local riders who had walked their bikes up the road – I must remember this next time. One of them recommended “Gobblers Knob” as the best trip back down hill, and it proved to be very exciting indeed. I was tempted to ride back up and do it again even faster, but my legs were starting to feel a bit jelly-like and my arms were tired so I followed the road back to the van.

I had intended to drive home on Sunday afternoon, but when I thought about having to get up at 5.00am to drive to the airport and pick up Felicity, I realised that I didn’t have much reason to go to Albany, and that I might as well camp somewhere just south of Auckland and save a couple of hour’s driving. Just north to the Tuakau Bridge is the Les Batkin Reserve which allows freedom camping, but when I arrived it looked a bit too civilised for my taste so I explored a dusty metal road heading under the bridge and south along the bank of the Waikato.

The spot wasn’t quite as peaceful as I had hoped, thanks to two young men who spent well over an hour repeatedly throwing a wheel at an old car body not far from where I had parked. Eventually they decided they had had enough, and I was able to spend the last 10 minutes of the day sitting watching the Waikato drift by. It has been a rather different trip on my own – on the whole it is more fun with Felicity, but I’ve enjoyed the biking.

2 thoughts on “Pirongia and Te Miro”