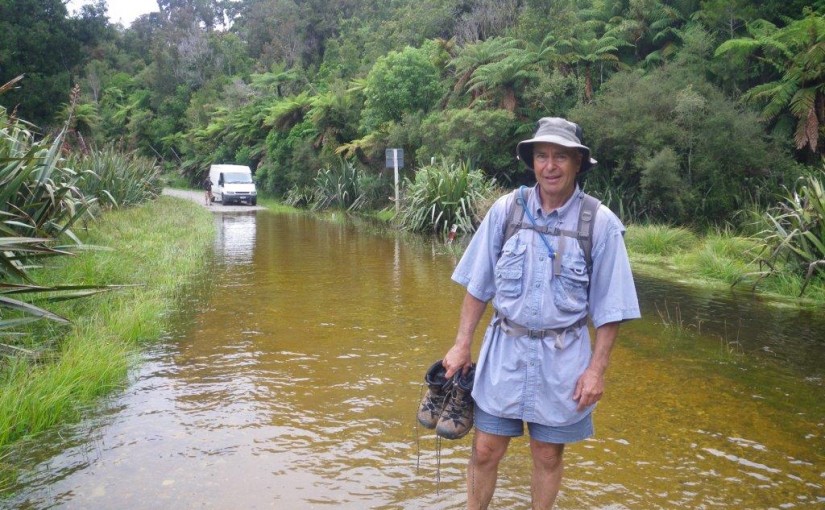 The rain arrived on Saturday morning as advertised, so we decided to drive to Greymouth and visit our friend Joy. Two days parked in the hot sun with almost no driving meant that our house battery had gone flat and the fridge defrosted, another good reason for running the motor for a while.


Joy’s house wasn’t suitable for camping so after lunch, a couple of hours of gossip and some blog uploading, we headed out to Cobden Beach where overnight parking is allowed. While we were drinking coffee the rain eased up a bit, and we almost went for a stroll before dinner, but before we could get organised it started bucketing down again so we lay around reading instead – our first day of no exercise whatsoever.

This morning we stopped in town to visit the supermarket, fill up with diesel and empty our waste tanks at a dump station, then we drove back up the coast to Punakaiki. It was absolutely crawling with tourists, but we scored the last space in the carpark and set off to look at the pancake rocks.

Not only is this a fantastic and unique natural attraction, but DOC have done an exceptionally good job of installing paths, lookout points, information signs and other visitor facilities. It was low tide when we visited, so the sea surging underneath the walkway wasn’t as impressive as it would be at other times, but it was still a great sight.

Near the end of the loop was a sign about the Hector’s dolphins which frequent the area, and when I looked out to sea a couple of them obligingly showed up and surfed on the waves while we watched. This dolphin has a much shorter, rounded fin than its bottlenose cousins which we often see around Auckland.

About a kilometre further up the highway is the start of the Pororari River Track. We ate lunch in the carpark then set of up a manicured trail through coastal forest. We had been thinking about kayaking in this river, but when I saw the swift-flowing torrent of brown water spilling out of the mountains I decided that it didn’t look like fun. At one point the track goes down some wooden steps to get under a huge limestone boulder. It was supposed to take an hour to get to the junction of the Inland Pack Track where we turned back, but it only took us 40 minutes.

This was fortunate, because when we drove up the Bullock Creek Road to walk the Cave Creek Track, we only made it half way before encountering a sign warning people not to continue if water was covering the road. It didn’t look very deep, so we parked the van, changed into our trusty Crocs and carried our boots through the flooded section.

On the other side was a van blocking the road, so we wouldn’t have made it much further even if I had driven through as I would have if it wasn’t for the sign. This meant we had an unplanned three kilometre walk up the road to the start of the track. Fortunately the road passes through a spectacular valley with limestone cliffs on either side, so we didn’t mind.

At the beginning of the Cave Creek Track is a memorial to the 12 students who were killed when a badly built viewing platform plummeted into a gorge back in 1995. The platform was not re-built, instead you now walk down some incredibly solid steel-framed steps set on concrete pillars, right to the edge of the creek. I’m sure hundreds of people could safely stand on these steps.

The track obviously gets a lot of maintenance, because the edges were neatly trimmed and the bush cut like a hedge. After the rain the creek was more like a river, and watching it flow out from the cave in the side of the cliff made it well worth the walk up.

By the time we walked back down the road the floodwater had cleared, and since I had spotted several nice camping sites near the carpark we drove back up to the start of the track. We are now parked right on the shingle bank of Bullock Creek, so I hope the forecast is correct about the end of the rain!

The water was very cold to swim in, but now that we are dry and sitting in the warm van it is nice to feel clean. The river flats surrounding us must have been farmed at some stage because they are covered in grass, giving us great views of the bush running up each side of the valley.

PS: I’ve just uploaded some more photos of the cave rafting which were taken by Kylie the guide.

One thought on “Punakaiki”