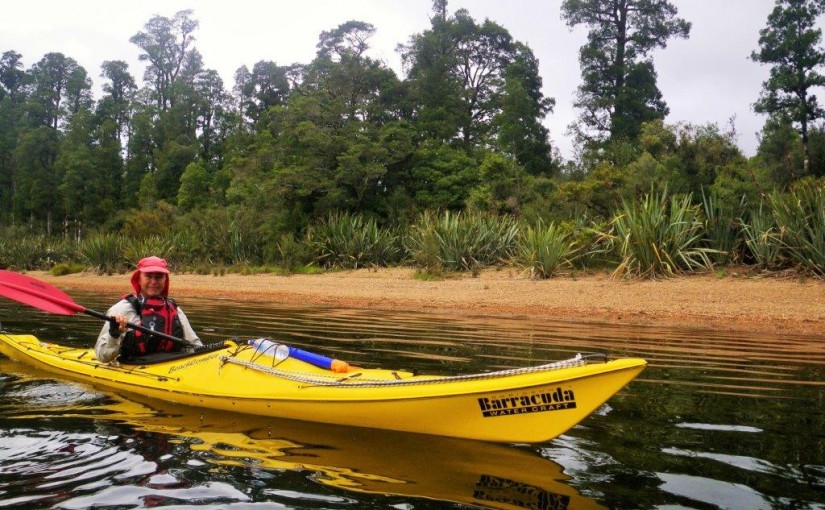 By the time we re-joined the highway at Fox Glacier we were ready for lunch, so we sat in the hotel carpark eating and doing a bit of work while we had internet available. There is no cellphone coverage south of Fox until you reach Hawea on the other side of the Southern Alps.


When we filled up with diesel I thought it would be a good idea to check the tyres, and sure enough one was a bit flat. By the time I figured out that the compressor at the service station wasn’t working it was slightly flatter. The mechanic told me it would be an hour before they fixed it, so we decided to use the time visiting the glacier.

As you drive up the access road there is a series of signs showing where the glacier reached in the past. It has even retreated a huge distance since we last visited in 1998. It was drizzling slightly when we started walking up the track from the carpark, so we put our ponchos on for a while, but it soon became too hot and we took them off again.

The track having to be re-built even more than the one at Franz, due to rock-slides and floods. It took us just over an hour to get up to the viewing area and back, so by the time we got back to town the air supply was working as promised.

The roads south of Fox are mostly straight and flat, so it was hard not to speed. There are quite a few one-way bridges to cross, which means I did have a bit of variety. We stopped briefly at a salmon farm to buy another whole fish which Felicity has just started to prepare for tonight’s dinner.

A bit after 6.00pm we stopped at the Lake Paringa DOC campsite for the night. All the prime spots with lake views were taken, but we found a pleasant and private place at the edge of the bush. After coffee I noticed that the sun was shining brightly so I went for a very pleasant swim in the lake.

When we woke up in the morning the cloud had rolled in and everything was pretty grey. We drove to the boat ramp and I was just starting to unload the kayaks when it started to drizzle again, and Felicity suggested that we perhaps should give it a miss. But there was no wind at all, and when I looked at the huge expanse of glassy water – perfect kayaking conditions – I insisted we go.

Lake Paringa has two arms separated by a peninsular with a big hill on it. It looks like it is almost an island, but we paddled right to the top of both arms and there is no connection. We cruised happily around the shoreline watching and listening to the local bird life.

It was midday by the time we got back to the van and packed our gear away, but we decided to drive a little way to have lunch in a new place. We chose Ship Creek, at a spot where the highway passes an attractive beach. The place got its name when the wreck of the ship Schomberg was discovered to have drifted all the way across the Tasman from where it sunk near Melbourne.

There are two short walks which should not be missed by anyone passing by here. The first went under the highway and followed a creek on a boardwalk up into the kahikatea forest. There are lots of information panels and interesting things to see.

The second walk went along behind the sand dunes to a small lake, and a viewpoint from which we could look down the Haast Plains with its series of ridges left by historic coastlines. Sadly you aren’t allowed to camp here, but it makes a great lunch spot.

At Haast township we turned off the highway and continued on down the coast to Jackson’s Bay, which is the only deep water port on the west coast. You aren’t technically allowed to camp here either but we expect we will get away with it. We can tell that Fiordland is just down the coast because the sandfly population is enormous, particularly vicious, and seemingly immune to fly-spray. Some of them were so keen to get at us that they squeezed themselves through the insect mesh – we’ll need to be covered in repellent tonight.

Jackson’s Bay is one of those towns that was planned by someone in Britain who laid out a nice grid of straight roads to make it look on paper like a normal subdivision. About 400 gullible settlers tried to live here, but they only lasted a few years due to the high rainfall, the dense bush, lack of access, and presumably loss of blood!

Thankfully, the sandflies were gone in the morning. The howling gale off the Tasman and the torrential rain was too much even for them. We abandoned our plans to explore some of the local tracks, and set off for Otago.