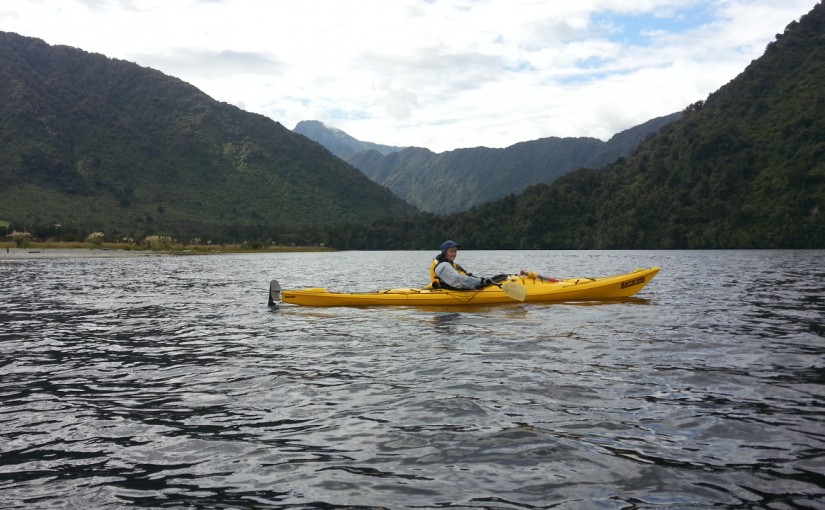 Just south of Greymouth is the town of Kumara where the famous Coast To Coast multi-sport race starts. Joy suggested that we head out to the start line and walk along the beach to the mouth of the Serpentine River.


We parked at the end of the road and hiked along a 4WD track through the sand dunes. There are a few flash houses in a new subdivision up on the cliffs, but the coastal flats are pretty wild. We had stopped in town to do a few chores, and it was late morning and stinking hot, so a swim in the river seemed like a good idea.

A couple of pairs of tourists turned up just as we had stripped naked, so we hurridly decided that it better be a togs-on swim instead. I had visions of swimming to the north bank, but the water was so cold it hurt my sinuses and I had to turn back. The swift current had swept me about 50 metres closer to the sea by the time I reached the south bank again, so perhaps it was just as well.

After lunch we drove south to Hokitika, then inland to the DOC campground at Lake Kaniere. We were fortunate to find a spot with a view of the lake because it is a popular place, and vehicles continued to arrive all evening. There was an afternoon breeze making the lake quite choppy, so we decided to kayak in the morning and contented ourselves with an evening swim.

As we had expected, the lake surface was glassy at breakfast time, so we unpacked our gear and got ourselves on the water at 9.00am. Several water skiers had the same idea unfortunately, but it is a big lake and a bit of wake didn’t bother us unduly.

The mountains in the background are covered with snow, but there was too much cloud around to get a good photo. The entire lake is surrounded by native bush – not a pine tree in sight. Right on the edge of the water we could see huge kahikatea with their roots exposed, and we wondered how they manage to survive without drowning.

It took about an hour and a half to reach the head of the lake where we turned around. Most of the skiers were on the far side, so we decided to return the way we had come instead of circumnavigating. We met another kayaker coming towards us on the way home, and stopped to chat with him for a while. I asked him about an unusual mounting on his deck, and he explained it is for a gimble-mounted compass for navigating when he can’t see any land. He is clearly more hard core than us!

We packed up and drove alongside the lake to pretty near where we had kayaked. By van this took less than 15 minutes. On the way we stopped to walk a hundred metres to see the Dorothy Falls, which we had been able to hear (but not see) from out on the water.

Our next stop was the Hokitika Gorge. This would be an impressive sight in any case, but what makes it unique is the bright turquoise colour of the river. This is caused by glaciers grinding granite to “rock flour”, which is mixed into the water when the ice melts.

There must have been almost a hundred other tourists visiting the gorge, and we had to wait to cross a swing bridge because of DOC warnings claiming any more than six people is dangerous. The safety precautions at this place were a bit over the top in my opinion, we even had to open a child proof pool gate to get down to the water.

I couldn’t resist diving in to see if my skin would turn blue, but any blueness would have been caused by the cold temperature. I think the glacier must have been out of sight just upstream! A couple of foreign tourists were jumping off a high rock, which seemed a bit risky to me considering how murky the water is. Perhaps all the warning signs have a purpose after all.

Our home for tonight is at Lake Mahinapua where there is another DOC campground. We are hiding in the van behind the insect mesh at the moment because there are many aggressive mosquitoes enjoying our visit. It probably won’t be too bad when we are moving around, but sitting outside wouldn’t be pleasant unless slathered with repellent. I keep seeing other campers arrive and set up chairs outside, only to disappear within a few minutes.

Before dinner we went for a walk around the camp, along the Bellbird Track and down to the water. I’m looking forward to another paddle tomorrow.

One thought on “Lake Kaniere”