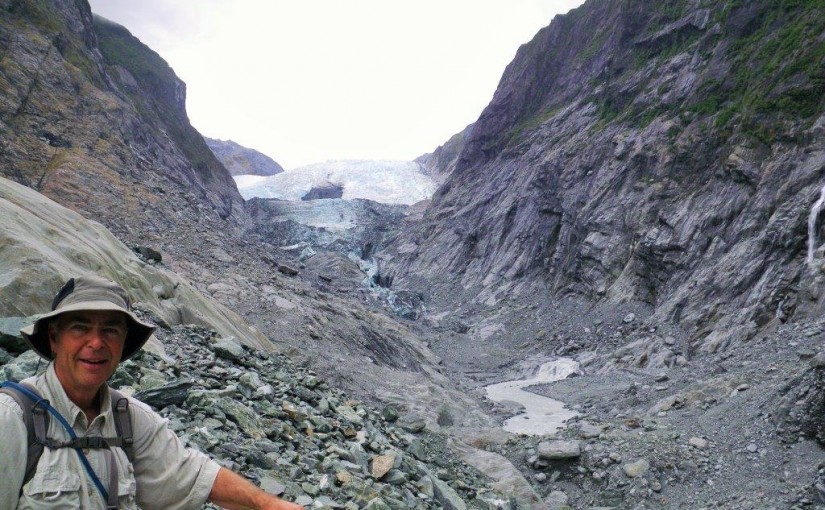 It is only a short trip from Okarito to Franz Joseph, so we arrived in time for lunch, which we ate parked in the main street. We did some shopping while we were there, and visited the information centre to ask about guided walks on the glacier.


The brochures show fascinated tourists exploring an ice cave, which greatly appealed to both of us, but the guy at reception was quick to point out that they couldn’t guarantee any particular feature which made us suspect that only a small percentage of their clients actually go in a cave. The cheapest tour was going to cost $350 each (because they fly you up in a helicopter), so we decided that we would give it a miss. Later I overheard a guide briefing a group and telling them the chopper ride is only 3 minutes.

There is a walk up to a tunnel that we did many years ago with our daughter Judith, but we didn’t remember this until we had done it again. The tunnel is quite long, and was hacked through solid rock to supply water for gold mining and later hydro electricity. My head torch had run out of battery so Felicity went first on her own then I went using her torch. There was about 150mm of freezing water on the floor so we took our boots off and walked bare feet, which was just unpleasant in my case but Felicity kicked a rock and thinks she may have broken a toe. The tunnel comes out in a narrow gorge under a waterfall, and a metal roof has been built to keep most of the water off the trail.

The Motor Caravan Association has a very attractive property in town where members can stay, so we moved there and settled in. After coffee we decided to walk around the corner and visit the local hot pools. These are not natural, but they have been beautifully designed to blend in to the bush and make use of glacier boulders to make the edges look a bit less like concrete. After an hour of so soaking in the 40 degrees “Pool of Tranquillity” I was feeling very tranquil indeed.

In the morning we drove up the road to see the famous glacier. It is way smaller than when I have visited in the past, and we had to walk over half an hour from the car park to get up to the viewing point. It is still a spectacular environment, and obviously pretty unstable judging by all the new tracks that have been made when old ones get washed away in floods. A couple of DOC workers with a small excavator were making a new drain while we were there. We must have arrived just before rush hour, because the car park was almost full when we go back to the van.

One thought on “Franz Joseph”