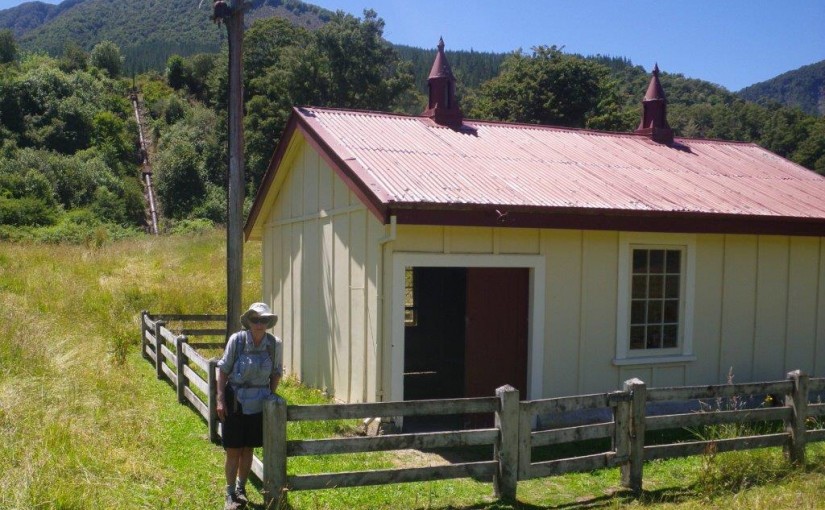 About ten kilometres south of Murchison is the site of New Zealand’s oldest hydro power station. We had stopped in town to do some shopping and visit the information centre and it sounded like an interesting place to visit.


There was a market on in town, but there were only about half a dozen stalls. We purchased some fresh herbs and some beech dew honey, which has a taste that is quite different to the ordinary variety made from flowers.

The power house is a dinky little wooden building that was open to allow us a look around. The scheme was built in 1921, and generated electricity until 1975, when it became uneconomic to maintain. Behind the building you can see the penstock pipe running down the hill.

The track was very easy to walk on, because it was fully benched to allow horses to cart cement and other building materials up to the weir where the water is diverted from the Matakitaki river. A long section of track followed a wooden sided water race that had been dug in the side of a hill – you can just see the water flowing in a shallow ditch on Felicity’s right.

It took us just over half an hour to get up to the water intake gate beside the weir. From there we continued on for another half hour to one of the old storage lakes, which is now more of a wide pool in the river, presumably due to a dam malfunction.

We had a swim, fed the sandflies and ate our lunch, then wandered back down to the van.

Now we are parked beside the Buller River just out of Murchison, making use of the internet in case tonight’s camp site is too remote. Every few minutes a vehicle turns up and people get out with rubber tubes or river kayaks, then disappear down the river. Our boats are not designed for white-water, so this isn’t a trip for us.