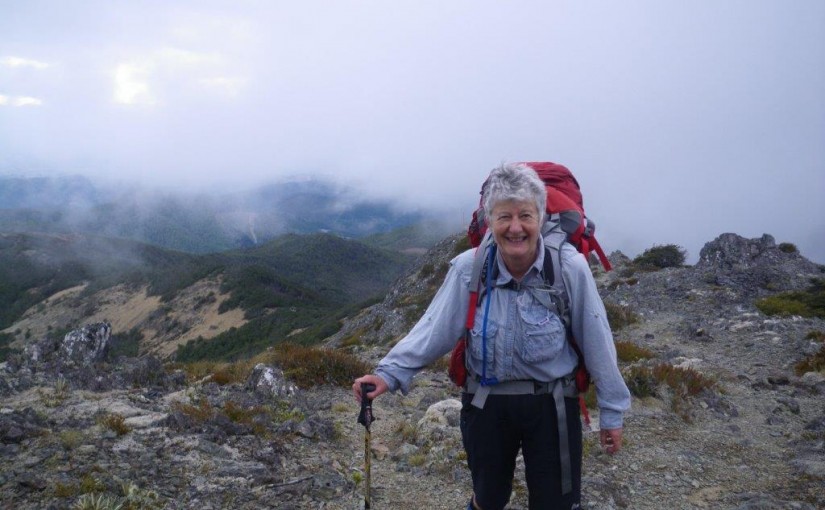 About six in the morning, Felicity started making tea as usual, and suggested that we get going early to avoid rain forcast for later in the day. It turned out to be a good call.

By 7.00 am we were on our way, climbing up out of the trees onto the open tops. After an hour or so we passed a small tent, where “Mad Dog” Murph and “Power Nuts” had spent the night. Apparently it is an American tradition for long distance walkers to have a nickname.

We decided not to make a detour to the summit of Mt Starveall, even though we were quite close. The track led back down into the bush until it reached Slaty Hut where we stopped for lunch.

We had been hearing many loud bird calls which Julie reckoned were long-tailed cuckoos. As we were leaving the hut one flew quite close, which according to a Federated Mountain Club magazine I read is quite rare, so I consider myself fortunate.

The next part of the track was relatively easy, with a climb up to the top of Old Man Summit. A couple of kilometers later we turned down a side track and descended about 300m to Old Man Hut.

We hadn’t even finished boiling the billy when the rain started. It soon turned to hail, and eventually snow began falling. We were very glad we had made an early start!

The temperature had dropped dramatically, so we lit the fire and soon had the hut toasty warm. This was much appreciated by two very wet Belgian Te Araroa walkers who turned up just before dark. They didn’t even mind sleeping on the floor.

One thought on “Old Man Hut”