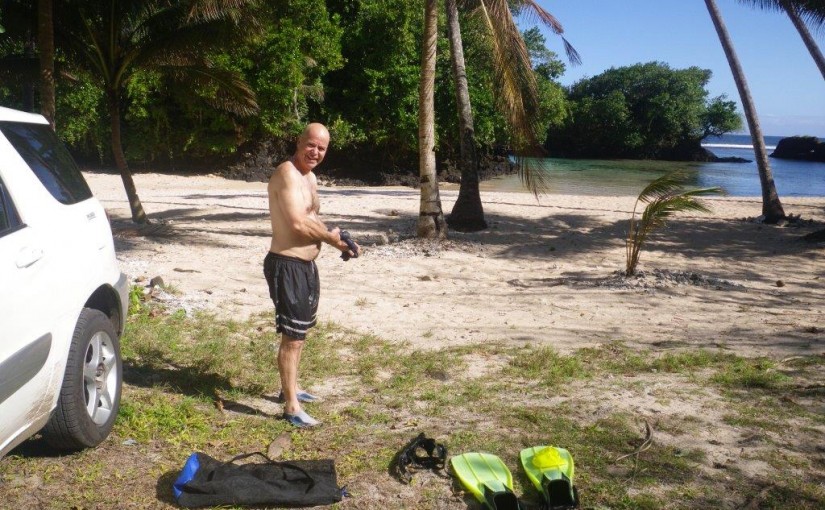 Felicity is not normally a person who responds to on-line adverts, but the when a message appeared on her tablet one cold grey morning at breakfast offering a very cheap five night package holiday in Samoa, she checked her diary and discovered a mostly free week. We had hoped to enjoy some summer weather during our recent Scotland trip, but it just didn’t happen, so I think she felt a bit deprived.


We are staying at a hotel in the middle of Apia, not far from the down-town market. The Manu Samoa rugby team is currently using the hotel for a training camp, so there are lots of large, brown heavily muscled young men wandering about. One of them is our next door neighbour, and he is very noisy, with a rather unfortunate taste for rap music. Yesterday the team were working on the grass right outside our room, carrying weights, running about, and crashing violently into each other.

The first morning we hired a car and drove out past the airport to pick up some friends from the Sheraton Aggie Grey’s, which is completely independent from the genuine, historic Aggie Grey’s in town. This has been closed for the last two years for refurbishment. I think John and Nancy thought this was where they had booked, and were somewhat surprised to find themselves 36km from town.

I drove us around the eastern end of the island and along the south coast to a beach at Siumu, just past the flash resorts at Mulivai. I parked near a boat ramp, but just as I was about to join the others in the water, a Samoan woman came up and told me to park over near her house, under a tree, “for safety”. I was expecting her to demand payment, but was pleasantly surprised that she didn’t. Perhaps hubby was due back with a boat load of fish.

The snorkelling wasn’t great, but the water was warm and there were quite a few tropical fish to admire. Nothing dinner sized though. After an hour or so in the water we were hungry, so we drove to a nearby resort and enjoyed a healthy lunch of raw fish and salad.

Further on around the coast is the Togitogiga waterfall, where we washed the salt off ourselves in the fresh water. Both Felicity and I swam right under the falls, and discovered that the force of the water pushes you down deep, and makes it quite a struggle to get back to the surface. Fortunately it hasn’t rained for a while and the river level is fairly low! The water was much cooler than the sea, but we were able to stay in a lot longer than we would have in a NZ river.

The next day Felicity and I were on our own, so we stopped at the central market to buy some local food for lunch. We weren’t too concerned by the fire-baked taro and bananas, but the aluminium foil wrapped palusami (taro leaves & coconut), and especially the unrefrigerated fish baked with coconut in a half shell seemed a bit of a risk. We decided to throw caution to the winds and survived to tell the tale, in fact it was delicious.

At the start of the eastern road to the south side of the island, which crosses Le Mafa Pass, is the Falefa waterfall, right beside the road. We drove past the carpark and stopped to see if it was worth visiting, or perhaps a swim. Felicity and I walked past a sign that says children $3, adults $5, and looked over the edge. The pool at the bottom of the extremely unimpressive waterfall was filled with brown foam, so we decided to give it a miss. Just then a Samoan man appeared and demanded “ten tala”. We told him that we didn’t want to swim, but he pointed to the sign and said “five tala, five tala”, in case we were retarded.

Felicity was incredulous: “you expect people to pay $10 just to look at the waterfall?”

“My land. Ten tala”, was the reply. Since the only cash we had on us were some stashed $100 notes, I showed him my empty wallet and offered a credit card. “Ten tala”, he repeated.

We actually had a ten tala note from a previous visit to Samoa ten years ago, but we discovered the currency has since been replaced, and it must be exchanged at the bank before it can be spent. Felicity grudgingly handed it to him, which made him very unhappy. “Money no good. You give ten tala”. At this point we were fed up with his stand-over tactics, so we walked to the car and got in. He didn’t try and give back the old note, but he did keep repeating “ten tala” as I drove away. I don’t recommend a stop at this scenic destination!

We turned off the main road and travelled down a very steep hill to the village of Samamea, at the end of Fagaloa Bay. We parked at a beach with no houses, and spent over an hour exploring the underwater scenery. I saw a small lion-fish with its beautiful, red patterned fins like a mane, hiding under a rock. On my way back to shore, I was sad to see a crown-of-thorns starfish, which is devastating to the coral wherever it gets established.

As I got out of the water, I noticed Felicity had attracted the attention of a dozen young school kids on their way home. School seems to finish soon after mid-day here. It seems that tourists don’t often get down this no-exit road very often, so we were quite a novelty. We enjoyed talking to them for a while, but eventually they became a pain and we had to tell them to go away. When we thought we were on our own again I went back to the car to get our lunch, to find they were all crowded around, writing rude messages (I presume) in Samoan on the dust covering our windows. When they saw the food, they all followed me back to Felicity, and we had to convince them to leave all over again.

On the way back to Apia we stopped at the Piula Cave Pool, where for a small fee you can swim in fresh water right beside the sea. There are two caves, with an underwater tunnel between them that you can swim through provided you can hold your breath long enough. The pools are inhabited by huge fish which are fed by the students of the theological college above.

As we sat in the sun drying after our swim, we noticed a huge (probably 180 Kg+) Samoan man heave himself out of his car with a spear and dive into the sea. We had parked at the top of the cliff and walked down the stairs, but this guy had paid the extra $10 to drive down because he probably wasn’t going to make it back up on his own. When we began leaving, I saw him (and his spear) get out of the sea and flop into the freshwater pool with the captive fish. I guess when you need 5,000 calories a day you have to get every bit of food you can find.

As we sat by the pool eating our breakfast one morning, a Samoan man was playing his guitar and singing some local songs. I noticed one of the verses was in English:

On Friday, which was the last day we had the car, we returned to the south coast, and to the Togitogiga National Park, but this time we headed down a rough track towards the coast, where we had noticed a walkway on the map. From the car-park it was only a few hundred metres to the edge of a low cliff, with the waves crashing below. This area is a 2000 year-old lava flow from Mt Fito, the most recent volcano on the island of Upolu. The track continued for over a kilometre along the cliffs across the rocks, through a pandanus forest.

We watched the sea surging through about half a dozen sea-arches, some beneath narrow headlands, and some through rock stacks just off shore. At the end of the track is a wide lava field, where the molten rock formed into shapes that look like coils of rope. There were a couple of blow-holes to watch, and we spent quite a while on the edge of one trying to take a photo at exactly the right moment.

We stopped at a nearby resort for lunch, but when they told us their beach was for guests only we left without spending anything. The next resort had a woman at the top of the road who wanted $20 to let us drive down. Since she couldn’t change $100 she said we could pay on the way back after buying lunch. At the bottom of a very steep driveway we found a beautiful beach, but no sign of any buildings whatsoever, so we drove back to the road and left without paying. On our third attempt we found another resort who agreed to sell us lunch (for $80!), but again access to the the beach was not permitted. We were starving by this time, so we surrendered. At least their food was good and the ambiance spectacular, with our table in the cool breeze on a deck right beside the sea at one end of the forbidden beach.

Once re-fuelled, we decided to drive back to the resort-less beach and pay $20 to go snorkelling. There were quite a few fish to enjoy, and several islands to swim around. We wondered if this resort was one of those taken out by the Tsunami a few years back.

On the last two days, we snorkelled at Palolo Deep, which is walking distance from town. Because it is a marine reserve, there are huge numbers of fish. There is also a lot of coral, but it isn’t as colourful as when we first saw it years ago. I spotted a crown-of-thorns starfish here as well, so perhaps there will be even less coral in the future.

We attended three Fiafia nights during our stay, where there is a buffet dinner followed by dancing and singing of Samoan songs. The best by far was at our own hotel, where the entertainment was put on by members of the staff. There was no recorded music like the other two, and all the performers looked like they were enjoying themselves. The final act of all these events was a fire-dance, which is always spectacular. These days they use the same low-temperature fuel that fire eaters use, but presumably in the old days they used hot burning coconut oil.

It has been a very pleasant break. Felicity accidentally left her computer at home, so we didn’t spend as much time working as I intended. The wifi at the hotel was pretty hopeless, so I wouldn’t have been very productive in any case. We complained so much that they sent an Indian technician over to our room to try and install an access point especially for us, but it seemed there was something wrong with the wiring. Fortunately they agreed to refund half of the approximately $50 we had grudgingly paid for internet in the first place, which always seems like charging extra for water or electricity to me.

One thought on “Apia”