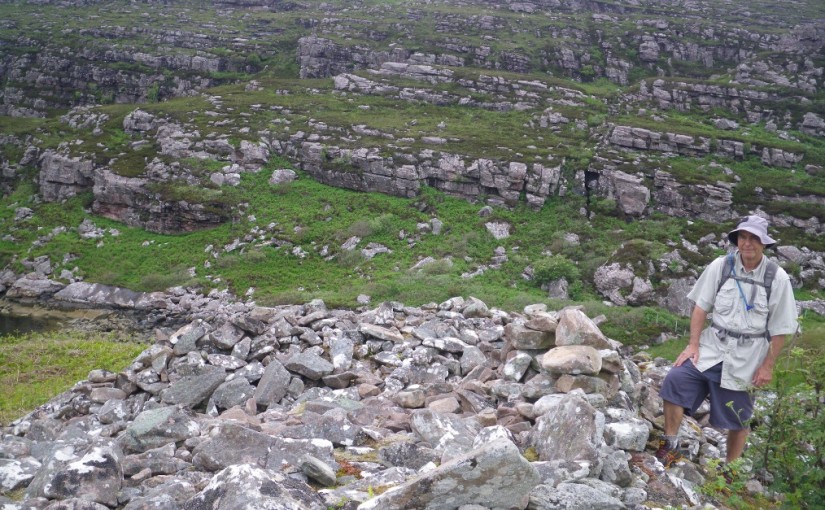 For the last couple of days we have been exploring the Scottish national scenic area of Wester Ross, but now we are north of there, on the edge of Assynt Coigach.


Our first stop this morning was Flowerdale Glen, where we walked up the valley for a few kilometres through the woodlands on a path around an estate that was the family seat of the Mackenzies of Gairloch in the 1700s. We had been led to expect “impressive displays of wild flowers”, but we have seen much better in the real wild country.

Before we got there though, we passed one of Scotland’s first hydro-electric power stations. During construction in the late 1940s, workers accidentally cut a cable which turned out to be the main international telephone line to Iceland. We have noticed a number of hydro schemes which seem very small by NZ standards. This means they don’t impact on the environment to anywhere near the same extent.

In Poolewe we made a brief stop to check out a Pictish stone that is in an old cemetery. It has been re-used as a gravestone in more recent centuries, but you can still make out runes carved on the surface. There was also a natural ‘font’ stone, the water of which is believed to cure warts. It is also supposed to never dry out, which isn’t really that miraculous in a country where it seems to rain every day.

Not far from there is the Inverewe Gardens. The first thing I noticed was that all the workers were wearing midge nets on their heads, which made them look rather strange. It may be because they sell them in the shop where you buy tickets, and they want to convince tourists that they are a necessity. We saw one French couple who had got sucked in, but the man had clearly realised how dorkish you look and had it slung over his back.

The garden is a micro-climate, because it is well-sheltered from the north, and surrounded on the south by the sea which is warmed by the gulf stream. Even so when we looked at the vegetables they are growing in their walled garden they looked like our garden in Auckland does in early spring, even though here it is mid-summer. The growing season is obviously very short.

There was an impressive display of trees and shrubs from temperate environments all over the world, including some from NZ. There were lots of colourful flowers and exotic plants, which kept us entertained until lunchtime.

We continued north, past a bunch of concrete structures left over from World War Two. Many of the Arctic convoys which transported supplies to the Russians in Murmansk and Archangel departed from here in Loch Ewe. There is still a NATO refuelling base on the edge of the Loch.

We continued over the hill to Gruinard Bay, where we parked on the shore and ate lunch. Out in front of us was Gruinard Island, where experiments with anthrax spores were carried out in the 1930s. For many years it was too dangerous for anyone to go there, but a few years ago most of the topsoil was removed and sheep were allowed to graze to show it is now safe. I wasn’t tempted to visit.

The next attraction was the Corrieshalloch Gorge and the Falls of Measach. The photographs we took couldn’t capture the impressive scale of the gorge, which is over 60 metres deep, but only a few metres wide. We walked a few kilometres around a loop track, past a bench seat made from a single tree-trunk that I thought was a work of art.

Up the road at Ullapool, we stopped briefly to look at the attractive buildings along the waterfront. This town is the major ferry port for the service to Stornoway on the island of Lewis in the Outer Hebrides. Just beyond the town, we detoured to the village of Rhue, and walked out to the lighthouse. On the way we wandered around a paddock for a while looking for the remains of hut circles dating to 300BC, but they proved elusive, much to our disappointment. Out at the lighthouse we had a great view of the romantically named Summer Isles to the north.

At the next village we drove down another very narrow country lane (at one point there is just over two metres clearance between a house and a rocky cliff, so large campervans can’t make it). At the end is a track that goes over the mountain for 11 miles to Achiltbuie up the coast. Up until WW2 this footpath used to be the main access to the town of Ullapool, and for 50 years from 1860 a family had the contract to walk over each day with the mail. There are signs at the beginning warning walkers that the area is unpopulated and that they should be equipped for alpine conditions.

We only walked out just over 3 km to the coast where we visited the iron age fort of Dun Canna, which dates back to 600BC. It is on a magnificent site looking out over the entrance to Loch Broom, where potential invaders would have been spotted miles away. Now it is just piles of stones and tumbled-down walls, but we could see that it would have been huge in its hey-day. Right at the end of the point was a defensive ditch very similar to what we often see at Maori pa sites.

It was after 6.00pm by the time we got back to the van, so we have decided to spend the night in the carpark. Smoked sea-trout and pasta for dinner!