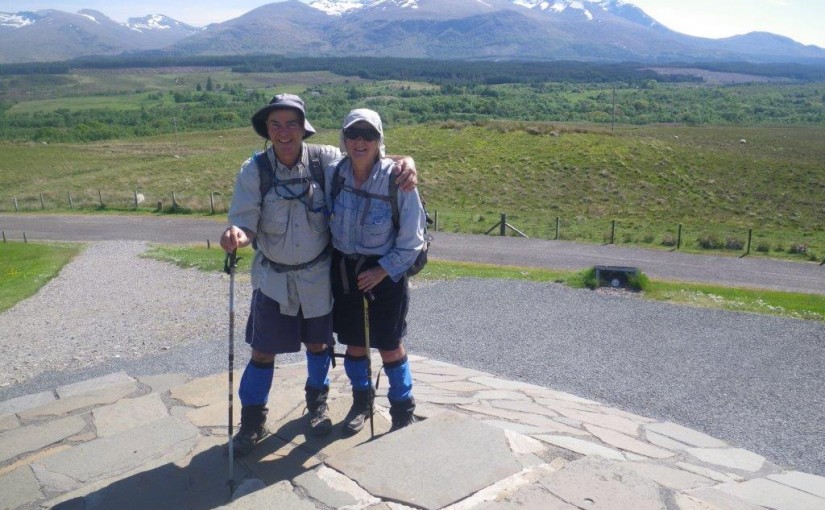 Most of today we have been walking along the towpath of the Caledonian Canal, which allows boats to travel the length of the Great Glen from the east coast of Scotland to the west.


Leaving Fort William, the Great Glen Way followed the shore of Loch Eil and around the estuary of the river Lochy until it reached the Corpach sea locks at the end of the canal. When we crossed the river beside the railway line we passed several photographers staking out strategic positions to get shots of the steam train that wasn’t due for over half an hour.

About half a kilometre up the canal we came to the railway and road bridge, and I was surprised that they were only about a metre above the water. On closer inspection I could see that they are both built to swivel sideways when a boat needs to pass.

Beyond the road is an amazing flight of eight locks known as Neptune’s Staircase, which lift boats a total of 64 feet above sea level. At its highest point in Loch Oich, the canal is 106 feet high. We were passed by several boats which were only travelling slightly faster than us. This meant we heard them behind us for about 10 minutes then watched them disappearing into the distance for the next half hour or so.

A sign pointed off the path to the Sheangain Aqueduct, so we walked down to check it out. It turned out to be a tunnel under the canal where the river Sheangain flowed past, beside a narrow road used by cyclists and pedestrians.

About midday we came to the Loy Sluice, which allows excess water from the canal to spill into the river below. This river also has an aqueduct. We walked down a path and across a farmer’s paddock till we came to the main River Lochy, where we climbed a fence, stripped off our clothes and enjoyed a dip in a pool. The water wasn’t as cold as I expected, but I didn’t stay in long!

We sat on the bank under the trees and enjoyed a picnic lunch. There were hundreds of tiny fish in the river, quite a bit shorter than whitebait but enough to make a fritter or two. It’s probably illegal to catch them here though.

Our next stop was at the Moy swing bridge. This is the only remaining of the original bridges on the canal. The (female) bridgekeeper has to open the southern half, then row across the canal in a rubber dingy and open the northern half every time a boat wants to pass. Boats purchase a pass for the entire canal which costs around £400 – this gives them eight days to make the journey.

About a mile later we reached Gairlochy, which is the official end of today’s stage. There is another swing-bridge here and we watched it being opened to let a boat through. A car drove up to the gate on the other side of the canal while it was closed, and the gateman looked over and said to us “It’s the po-lice. Maybe the bridge is going to break down…”

At this point we could have rung our host for this evening and they would have come and picked us up to drive us the 5km to Spean Bridge. As it was still early afternoon, we decided to walk instead, and a Danish woman who is also on the Great Glen Way asked if she could join us.

The first 3.26km were on a country road which was surprisingly busy with traffic. A local politician died recently and his funeral was today, so the area was probably a lot busier than usual. It was hot in the sun and hard on the tarmac surface, so this section wasn’t much fun.

Eventually we reached the junction of the A82 where there is a Commando Memorial from the second world war. This area of Scotland is where elite members from all of the allied forces underwent advanced training for special operations.

From here a narrow path lead down to the bank of the river Spean, then followed an old rail track bed for several kilometres. It passed the ruins of General Wade’s High Bridge built in 1763. This is where the first shots of the Jacobite uprising were fired. A dozen locals were defending the bridge against a large contingent of English troops. By running backwards and forwards and popping in and out of the rocks and trees, they convinced the English that they were a much larger force than they were.

Another kilometre on are the ruins of the railway viaduct across the Spean River. At this point we left the rail bed and followed along the side of the river into the village. This final 3.2km was very pleasant, and worth the extra effort.

We just had time to unpack, do a bit of laundry and have a shower, then it was time to head back into the village for dinner at the railway station. The restaurant here has a good reputation, and it was lucky we had booked because we saw quite a few people get turned away.

There were lots of old advertisements and notices inside. A message outside the toilet said:

“This room is equipped with Edison Electric Light. Do not attempt to light with match. Simply turn key on wall by the door. The use of electricity for lighting is in no way detrimental to health, nor does it effect the soundness of sleep.”

We finished our dinner with a single malt whiskey each. I had a 16-yr-old Lagavulin which I found to be a very fine drop. I don’t expect to have any trouble sleeping tonight.

One thought on “Spean Bridge”