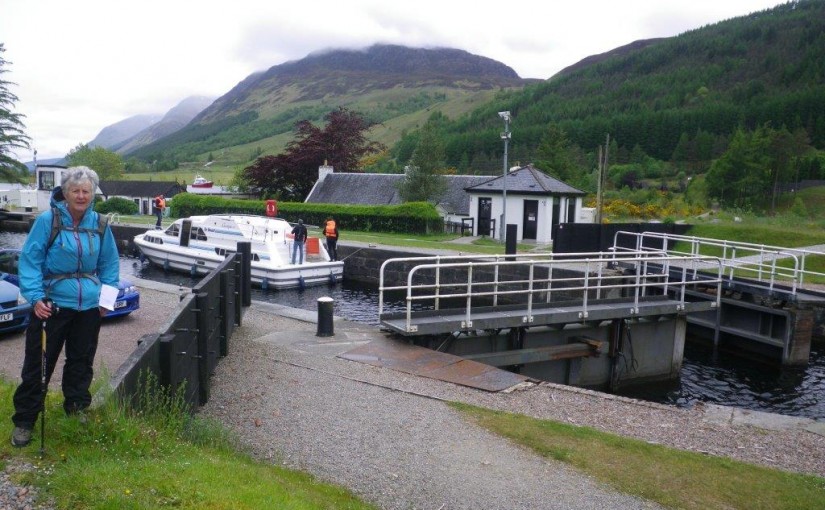 After breakfast this morning our host drove us back to Gairlochy where we had left the Great Glen Way yesterday. The hot summer sun has been replaced by cloud and mist, and the temperature seems to have dropped about 10 degrees. It didn’t rain, but we needed our coats on to keep out the cold wind. No swimming in the loch today!


This section of the trail passes through land owned by the Camerons of Lochiel. The first four miles followed the edge of Loch Lochy along a narrow country lane, with attractive trees and small beaches. The Cameron museum doesn’t open until after lunch, so we didn’t take the optional side-trip.

The tiny village of Clunes near Achnacarry was the centre for training WW2 commandos in boat skills. We passed the remains of a fake landing-craft where soldiers practised storming a beach under live fire. Instructors were specially trained to fire real ammunition “close, but not too close”. We also saw the boat shed where there was a collection of just about every variety of small water-craft, so that commandos could learn to row dinghies and paddle canoes and kayaks.

The next 15 km or so were quite high above the water, and along a road through the Clunes and then South Laggan Forests. It got a bit tedious after a while, so we were relieved to reach the farming settlement of Kilfinnan in the early afternoon. Near here is the site of the 1544 Battle of the Shirts, where a fight between Clan Donald and their allies Clan Cameron versus Clan Fraser and men from Clan Grant took place on such a hot day that they took off their plaids and fought in their undershirts.

At the Laggan Locks we crossed just in time to watch a launch passing through. The waterway from here is at the high point of the Caledonian Canal, and is cut deeply through the forest. The path beside it was through attractive and varied trees, a relief after all the pines earlier in the day.

We ended our day with a visit to the Eagle Barge “floating pub” for dinner. This is an ex Dutch coal barge that has been permanently moored at Laggan Lock for the last 14 years. During the 2nd world war it was requestioned by the Germans who armoured it and used it as a troop carrier. It is filled with all sorts of strange items collected from around the world, including actual swords used in the movies Lord of the Rings, Last Samurai, and Braveheart. We had a wonderful dinner of assorted seafood and a grilled trout.