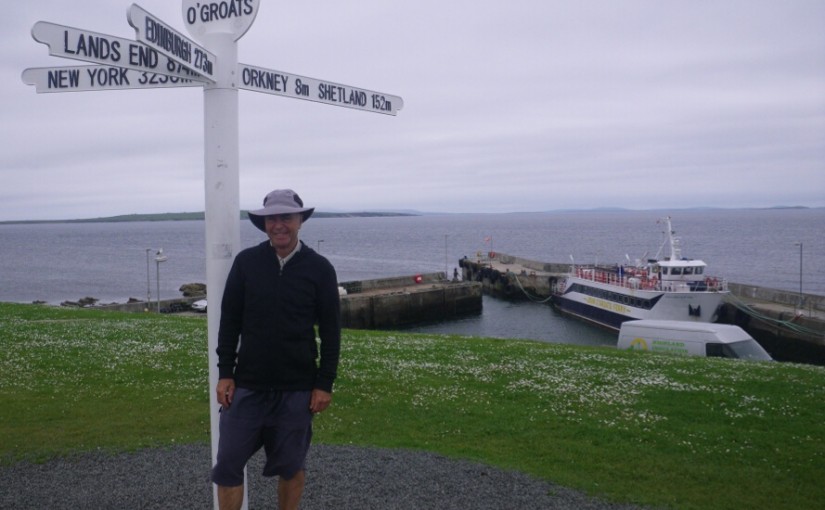 We have done a lot of driving today, so now we are back in the lowlands, a few miles north-east of Inverness on the shore of the Moray Firth.

Our campsite last night was very exposed, and it was raining slightly when we woke up, so we drove into the village of Tongue and ate breakfast in the middle of town, parked outside the public toilets.

The next bit of road crossed what is called the “empty coast”, because there are very few towns, and not much to see. After an hour or so I made a comfort stop at Sandside Bay, near the town of Dounreay. Since the van badly needed water Felicity decided to fill up the tank from the tap at the public toilet.

While I was waiting for her I looked across the bay at what I was pretty sure was a nuclear power plant. Then I saw a notice on the wall of the toilet block saying:

“Radioactive metal has been detected in the sand on this beach. It is invisible to the naked eye. Do not remove any material or objects that you find.”

From then on I couldn’t help thinking of the town as “Doom Ray”. When we stopped for lunch later on, I noticed an alarming amount of sand had managed to find its way into the van on our shoes. Since it never gets completely dark here I won’t be able to tell if we develop an unhealthy glow.

Felicity read in the guide that Dounreay was an experimental nuclear plant, and that it is now being decommissioned. I’m not sure if this means the experiment was a failure because of leaks, or that decommissioning involves chucking the radioactive rubbish into the sea.

Just before we reached the town of Mey, where the Queen Mother used to have a holiday home, we stopped at a pub and asked if we could use their wifi while we had a cup of tea. The tea was only luke warm, but the internet worked well, and I was able to get a few urgent jobs done for clients and to upload the previous three blog entries.

It wasn’t far from there to John ‘o Groats, named after a Dutch man who set up the first ferry service to the Orkney Islands, which we could see just off the coast. Since it isn’t by any means the most northerly point of the mainland, I can only assume clever marketing has convinced people it is the top of the country. Basically it is a carpark surrounded by tourist shops – there is nothing much of interest to see. We took the obligatory photo and ticked the box.

Many of the place names in this area are Scandinavian, and I was interested to learn that it didn’t become part of Scotland until a treaty was signed in 1266.

We stopped for lunch further south in Wick, known as “the armpit of the United Kingdom”. This seemed a little cruel, and we quite enjoyed our brief stay out on the cliffs with the ruined Castle of Old Wick in our view.

Another short drive took us to the top of the Whaligoe Staircase. This consists of 365 stone steps down a cliff into a rocky bay. In the olden days, village women used to climb these steps every day carrying baskets of herrings. It was rather foggy and cold at the top, but quite clear down at sea level. We were warm by the time we climbed back up to the van.

Another couple of miles down the road we took the turnoff to visit the “Hill o’Many Stanes”. There are at least 192 standing stones arranged in a fan shape of 22 rows, and they could be up to 4,000 years old. Some archaeologists believe it was a graveyard for slain Picts, while others think it might have been an astronomical calculator. I thought that perhaps some prehistoric blokes had just killed a large animal and had lots of time on their hands, and thought “let’s mess with the heads of future tourists”, in the same way the crop circle guys did in the 20th century.

I had expected it would be a fast drive down the east coast, but a thick fog rolled in from the sea which slowed us down a bit. I let a couple of other cars pass us so that I could follow their tail-lights and they could do the hard work of finding the way.

The fog meant we missed seeing the statue of the Duke of Sutherland, AKA Scotland’s Joseph Stalin. After making a fortune by forcibly evicting thousands of crofters and running cattle, his family erected a 30ft statue on a 79ft column, at the summit of a prominent hill. The inscription claims it was created by “a mourning and grateful tenantry to a judicious, kind and liberal landlord.” For many years there was a campaign to have it removed, but this has now died down.

We looked for free camping sites as we neared Inverness, but the area is heavily populated, and it had started to rain so we have paid to stay at a caravan club campground on the coast. I’m looking forward to a hot shower after dinner.

One thought on “Rosemarkie”