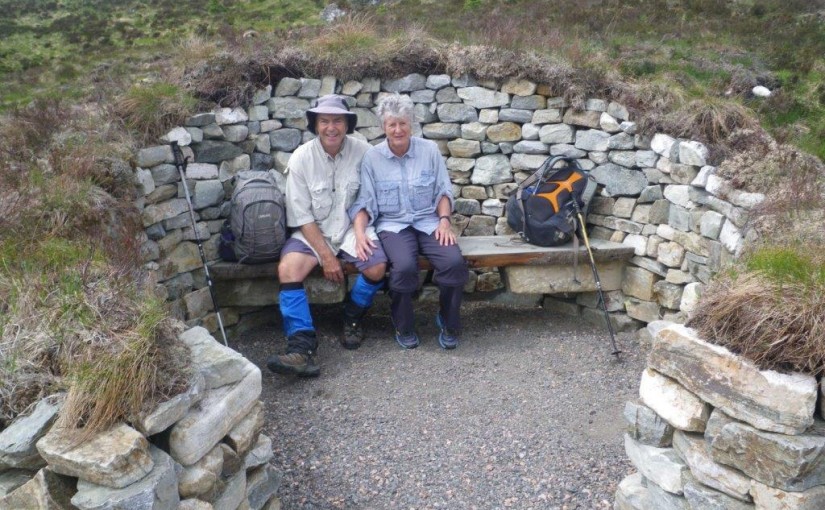 The Great Glen Way south of Fort Augustus used to run parallel to the highway through the pine forest, but feedback from walkers that it was boring inspired an alternative route through the moorland at the top of the hill, above the trees.

Since we only had 15km to walk today, we decided on the scenic route, and spent the first half hour zig-zagging steadily upwards through the forest. The view of Loch Ness from the top is spectacular, although we were a bit disappointed at the first viewpoint because the feature described in great detail on a sign was hidden behind trees.

Cherry Island is actually a crannog, which means it was built by humans on a shallow section of the loch. Piles of stones were supported by logs driven into the ground, usually with a narrow causeway joining them to the land. Some crannogs are over 5,000 years old, but this one is thought to be about 2,500. Cherry Island had a small castle in the 15th century, but after the water level of the loch was raised when the Caledonian Canal was built it is just a small mound with wild cherry trees growing on it. Part of my interest is that it was originally named Murdoch’s Island, which means there is a remote possibility of a connection with my maternal ancestors.

We continued on across the hills, until we came to a clever little stone shelter that seemed like a good place to stop for lunch. Felicity made another panorama from this spot – you can just see me standing at the left. While we were eating, a couple of RAF transport planes flew up the loch only a few hundred feet up – way below us. Later in the day a jet went roaring up the valley we were in – this must be an area where they practice low flying.

Eventually the path led back down into the forest. I was lucky enough to see a pine marten cross the track about 20m in front of Felicity, who unfortunately was looking at her feet and missed it.

Invermoriston is a very small village with a couple of picturesque stone bridges crossing the Moriston river as it descends through a rocky gorge to empty into the loch. The current road bridge was built in the 1930s, and is quite attractive, but the older Thomas Telford bridge, built in 1813 is even prettier, even though it is not in very good repair. When it was built it went way over budget because the contractor was lazy and inattentive.

On the way to our accommodation we passed Saint Columba’s Well. It has apparently been there since Pictish times, but for centuries the water was reputed to be poisonous, and cause boils and blisters if a splash touched your skin. In 565 AD St Columba blessed the well, and since then it has had miraculous healing powers. I managed to get some of the water on the end of my walking stick and convinced Felicity (in the cause of science) to let me test it on her skin. There haven’t been any complaints of injuries – we’ll find out tomorrow if her sore feet are better.

Because it was a relatively short days walk, we arrived too early to go to our B&B, so we sat in the comfortable lounge of the local pub and drank a pint of bitter. After a shower, a coffee, and writing most of this, we went back to the pub for dinner. It was built in 1740, and on the way to the toilet they have a small section of the original one metre thick stone wall exposed. After eating, we listened to a band called Eskaness play some traditional Scottish/Irish music.

One thought on “Invermoriston”