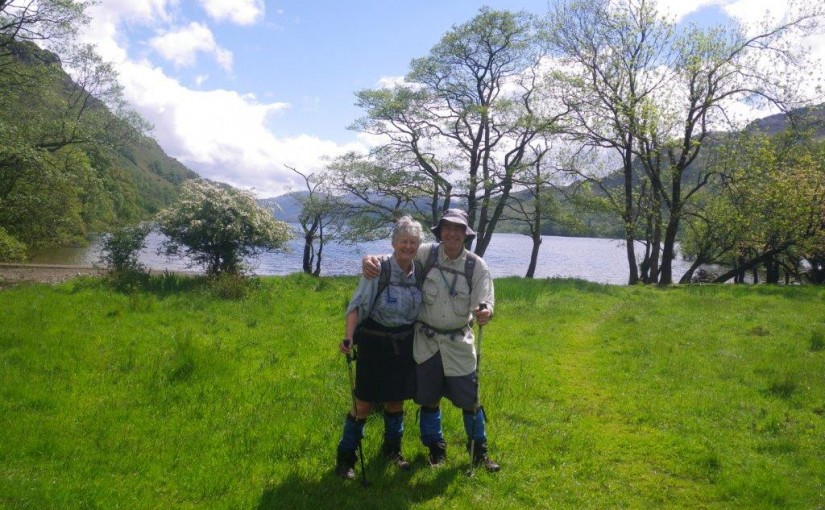 We’ve spent most of today walking along the bonie, bonie banks of Loch Lomond – in the pouring rain. The sun that is supposed to shine bright upon the loch didn’t put in an appearance until we were leaving it.


The weather wasn’t too bad when we left, but it wasn’t long before our ponchos were on.

I had seen on the map that there was a choice of routes – one track along the loch shore, and another higher up in the forest. I got excited, thinking that these must be the famous low road and high road from the song, but the proprietor of our B&B told us that this is actually a complicated metaphor connected to the Jacobite rebellion implying that one of the travelers is going to be executed.

As it happens, the ‘low road’ was fenced off, with a big notice informing us that there was major reconstruction work going on which would be finished in May 2014. Although there was a well-worn path around the fence, we took the high road.

After a couple of miles we came to a bench where according to the guide book there is a great view of a mountain called the Cobbler across the loch. We could barely see the water, let alone the far side.

The next section of the trail passes through a forest that is being restored to its natural state by volunteers who are removing invasive species. In this part of the world this means rhododendrons, which I had been enjoying all along the way due to their varied flowers, but I guess they don’t really belong in the Scottish wilderness.

The waterfall in the photos is Snaid burn, just before the Inversnaid Hotel, where we invested in a bowl of soup and a pot of tea instead of eating lunch in the rain. Apparently many famous people have patronised this establishment in the past, including Queen Victoria, Samuel Taylor Coleridge, William Wordsworth and Gerard Manley Hopkins.

It was still raining when we left, but we made a detour to see Rob Roy’s cave, where the outlaw supposedly held his kidnap victims. This part of the Way is the toughest due to lots of uneven rocky steps and slopes, made more difficult by the rain. At one point on the track we noticed a pair of camouflage wet-pants on the ground, and Felicity thought they probably belonged to a Scottish walker we had met previously so I stuffed them into my pack.

Just as we came to the end of the loch and began to head inland, the clouds cleared away and the sun came out. As we reached the top of a low ridge, we came across a family of deer who were clearly aware that they were in a no-hunting area because they were happy for us to be about 20 meters away.

The next hour or so was probably the most enjoyable so far, as we were surrounded by mountains (some with patches of snow), and it was sunny and warm. Alongside the track the ubiquitous bluebells were replaced by primroses which made a nice change.

As we started descending to Beinglass Burn the weather gods decided to remind us where we were and there was a brief hail-storm. It cleared up just enough for us to take our coats back off again, but when we crossed the Falloch river the rain resumed and by the time we reached Rose Cottage where we are spending the night there was thunder and lightning.

We’ve just eaten dinner at the Drovers Inn, which was built in 1705. The low-ceiling rooms were decorated with swords and old guns, and a knight had left his armor behind in the hallway. There were also display cases with just about every type of local animal, including a bear and a dangerous looking wolf. Naturally the hotel is haunted, but the ghosts gave us no trouble during our visit.

When we saw there was venison on the menu the choice of meals seemed obvious. The owner of the wet-pants was also eating there, and insisted on buying us both a second beer as a reward, so now I’m rather sleepy.