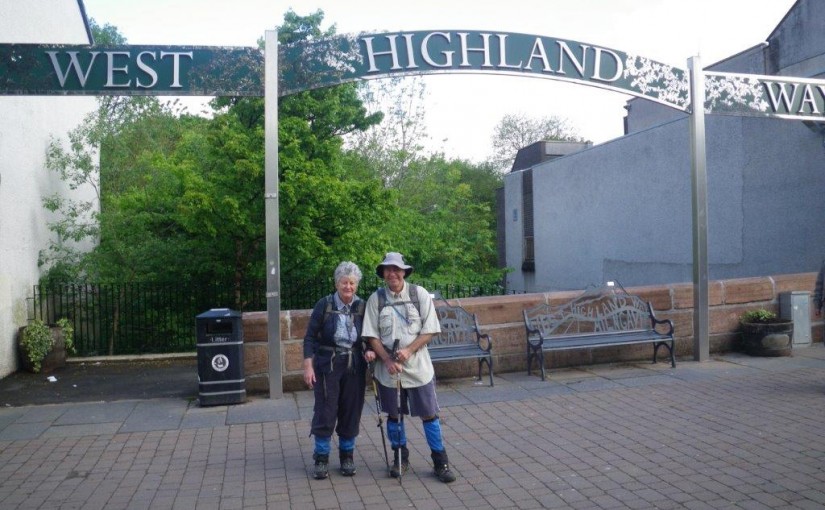 When we woke this morning in Milngavie the sky was blue and the sun was shining brightly. The clouds started to roll in as we were eating breakfast, but it hasn’t rained more than a few spits so we have had a great first day of walking. We could have started the day with a “full Scottish breakfast”, but the alternative of smoked salmon and scrambled eggs seemed a much better choice.

The trail began by following a river out of town, so we were in the woods almost immediately. There has obviously been a lot of rain because the ground is quite boggy off the track. There are lots of bluebells and other spring flowers so the trail is very attractive. Some of the yellow flowers you will see in the photos are gorse, but lots are broom.

The bird life is quite different to NZ. I saw a red-breasted robin near the start of the trail, and lots of black rooks in the fields. We also heard a couple of cuckoos calling to each other in the distance, probably marking their territory.

We walked past a small loch then climbed up over a low ridge near Dumgoyach – a high basalt bush-covered hill left from an ancient volcano. The 5,000 year old standing stones that we hoped to see proved elusive, much to our disappointment.

The next section of the way follows an old railway line which was built in 1867, but closed in 1951. Beside it is an aqueduct that channels water from Loch Lomond down to Edinburgh. Felicity talked to a group of young women on a two day walk as part of a Duke of Edinburgh award, but they weren’t enjoying themselves at all, and couldn’t wait to get finished and into a bar.

The Glengoyne distillery is close to the trail, but since the tour involves sampling their products I decided to give it a miss, since it was just before midday when we arrived, and whiskey is more likely to make me want to sleep than walk.

A little later we came to some picnic tables beside the track, so we sat and talked to a couple of English walkers while we ate lunch. Dozens of other walkers passed by, so it is obviously a popular track.

The old railway ended at a stone bridge where we climbed up onto a minor road for a while. After passing Troll Bridge, we climbed a hill from where we caught our first glimpse of the Scottish Highlands on the horizon.

Not long after that we diverted off the trail and walked to the village of Dryman, where we are spending the night. Our big packs were waiting for us in our room when we arrived, which is very civilized. The B&B owner told us that when the van which delivered them drove around the corner to the next stop, the driver neglected to put the handbrake fully on, and the van rolled several hundred yards down a hill and smashed into a hedge. I hope all is well when it comes to pick up our bags again tomorrow.

The internet must be the slowest I have ever used, but apparently there is a fibre-optic cable nearby that will fix things when it is eventually connected.

For dinner we crossed the road and patronised the Clachan Inn, which was built in 1734 and claims to be the oldest licensed pub in Scotland. Since our bed was within staggering distance, we sampled a 10-yr-old and a 12-yr-old nip of Glengoyne whiskey, which were similar enough that I was glad we didn’t pay nearly twice the price for the 17-yr-old version.