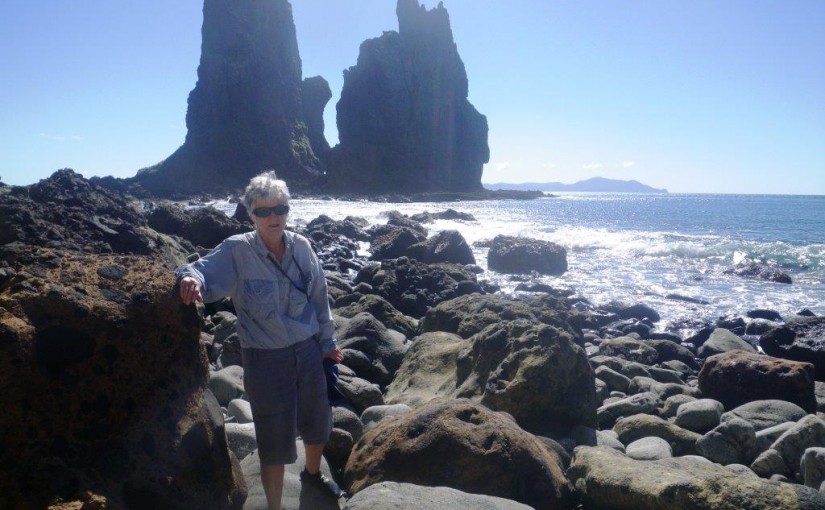 Up at the northern end of the Coromandel Peninsular, past Cape Colville, is the beautiful DOC camp-ground at Fletcher Bay.


At the end of a long dirt road, Fletcher Bay is a bit off the tourist route, so the camp was mostly inhabited by Kiwis. Over Christmas it gets booked out, but there was plenty of room for us this Easter. Because we had kayaks, the camp manager offered us a site right on the beach.

We hit the water as soon as we could unpack, and paddled out around Square Top Island. There was a bit of a swell, since the Colville Channel is pretty much open ocean, but not much wind so we felt reasonably safe.

The Pinnacles are not actually an island as shown on the map, although I am sure that the waves would wash across the narrow spit in a big storm. We landed on a little beach and walked around the coast over the boulders looking for a sheltered spot for a swim, but ended up returning to the kayaks and swimming there.

We huddled behind a big rock to eat lunch, because the wind was starting to pick up a bit. The photo titled ‘heading back’ shows me about to try to drop my rudder and get under control before hitting Felicity taking the photo. I didn’t manage.

After a rest back at the camper-van, we summoned enough energy to go for a snorkel around the rocks. Despite dozens of keen fishermen (and women), there were a surprising number of fish to see. I even came across a small school of blue mao mao.

Before we went to sleep that evening, we opened the rear doors of the van so we could watch the moon rising over the sea and hear the waves washing on to the beach.

Just on mid-night, we were woken by a loud klaxon alarm sound. Felicity had set her iPad so that we could watch a lunar eclipse. I was pretty drowsy, but enjoyed watching the full moon getting slowly covered until only a small sliver was visible. I might have dozed off and missed it being completely covered, but it was still a thrill.

One thought on “Fletcher Bay – The Pinnacles”