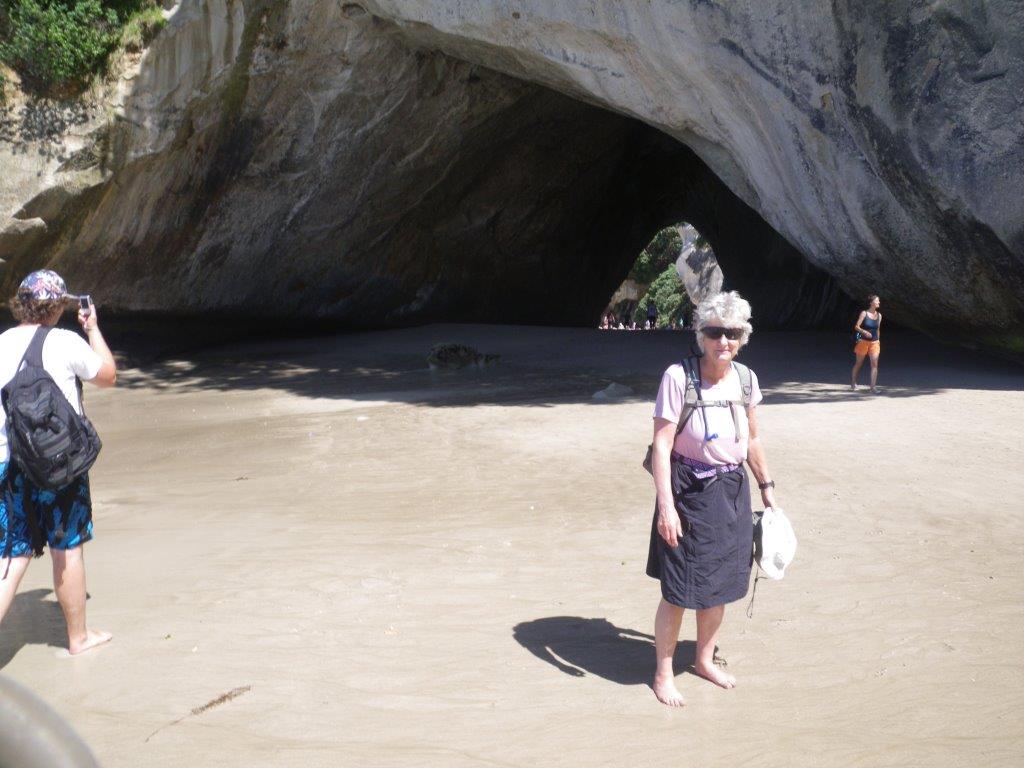 By the time we loaded the kayaks and all our gear into the camper-van it was nearly midday. We were keen to get down to Coromandel as soon as we could, so I drove until we reached the top of the hill on the Kopu – Hikuai road where I knew there was a nice spot to stop for lunch.


We expected that the six camper-van places at the Cathedral Cove car-park would be full on a fine Anniversary day weekend, but to our surprise there was one with a van just leaving when we arrived mid-afternoon. There are only about 20 places for cars – most people have to park down in Hauhei and catch a shuttle bus, so we felt very privileged.

The path down to the cove was packed with tourists walking in both directions, but we were keen for a swim despite the crowds. Even the side track through the pururi grove had traffic.

The beach was also rather busy, but we enjoyed swimming around the rocks at the south end of the bay and exploring the sea cave there. It was great to enjoy a shower under a fresh waterfall afterwards. On the way back we detoured to both Stingray Bay and Gemstone Bay, where we saw there was a snorkelling trail promoted as “the best diving on the peninsular”. We decided to return next day.

Back at the van, I noticed to my dismay that there was water dripping steadily onto the road and running across the asphalt. As we were parked right beside a sign saying that overnight stays in self-contained vans was permitted, but that there should be “no discharges”, I hoped that there would be no enforcement. I checked the radiator to confirm that it was, as I suspected, our fresh water supply that we were loosing rather than the engine coolant, which would have been a much more serious problem.

The last two photos were actually taken on Saturday, when we returned for a second night in this beautiful spot, but I’m including them with this post because the next is about kayaking.