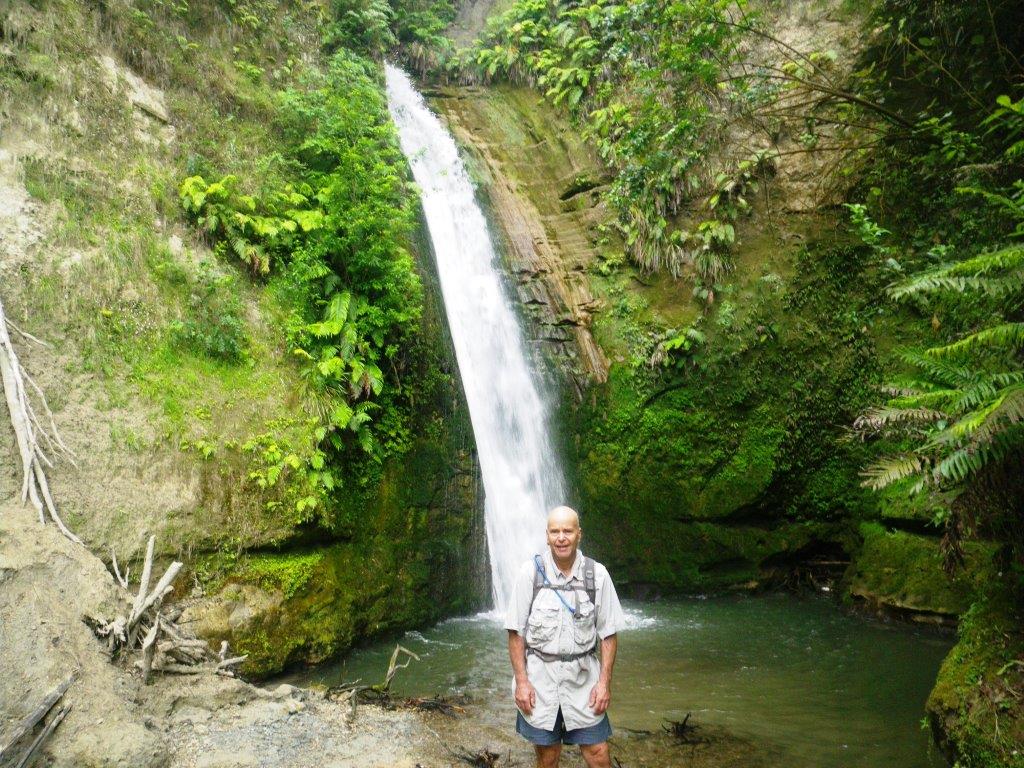 It was drizling this morning when we woke up so we didn’t explore the area around the Lake Tutira camp.

Not far down the highway, however, we saw the entrance to the White Pine Reserve, and decided that we wanted to check it out. Fortunately the weather had improved somewhat, and we didn’t even need to put our coats on. This reserve is a small valley that miraculously survived any kind of modification by humans, unless you count the sealed path and boardwalks that allow tourists to admire the untouched bush.

The main trees are Kahikatea, Tawa, and Matai, but of course there are lots of nice ferns, nikau palms and other natives. I learned that the hen-and-chicken fern was eaten by Maori as a salad, so I might try some next time I come across some not in a DOC reserve.

After about an hour’s walk, we jumped back in the van and continued onwards, for just a couple of kilometres to the next stop at the end of the Tongoio Falls walkway. The begining was back where we had just been, but we decided it was just a bit too long to do all of it in both directions.

There are actually two different waterfalls on this track. I can’t remember the name of the falls that I’m standing in front of. On the ground we found fossilised shells that have been chipped from the local limestone. This whole are would have been at the bottom of a shallow sea a few million years ago.

The Tongoio falls are behind Felicity in the photo and are actually quite high, but not completely visible from the lookout.

After we returned to the van we continued on towards Napier and were soon at the coast. Our first stop was at a roadside stall where we stocked up on cherries, plums, apricots and nectarines. It’s a good time to be travelling in Hawkes Bay!

In town we hit the supermarket, then parked on the beachfront and ate lunch. We drove around looking for campgrounds which have fallen victim to development, and finally found one with free wifi so that we could catch up on emails and blogs now that we are back in internet land.

2 thoughts on “Tongoio Falls and Napier”