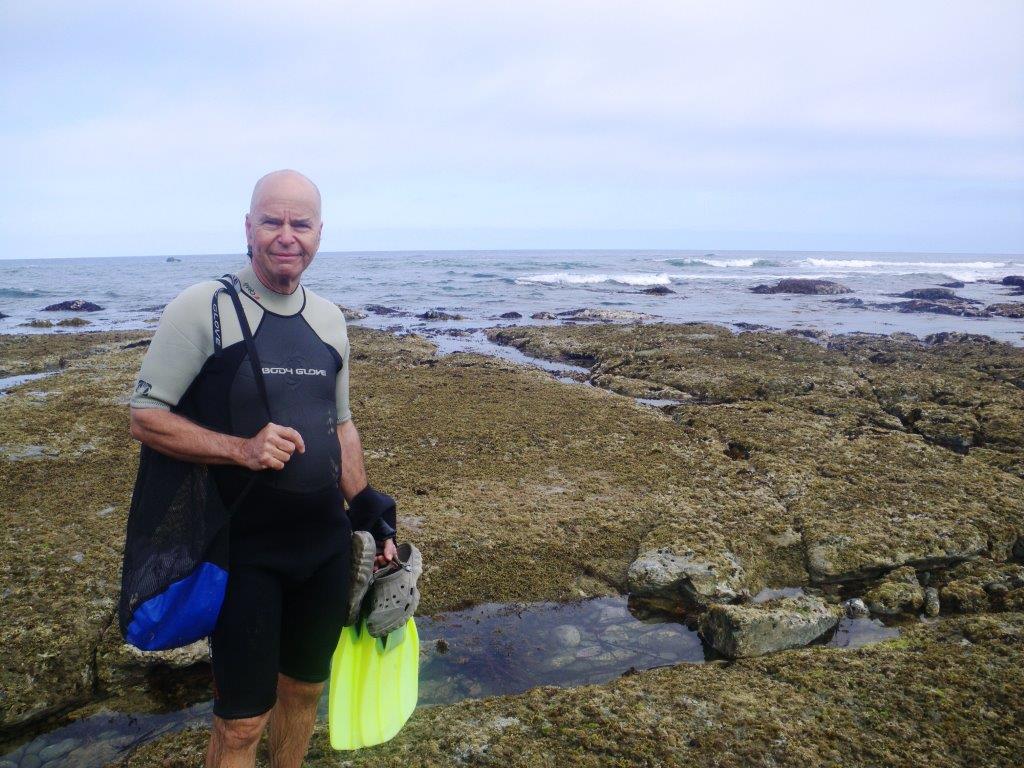 The free camping area at Pourerere Beach is right beside a dusty road with lots of traffic, so even though it had a nice sea view we only stayed long enough for a cup of tea.

The next beach south is at Aramoana, and it turned out to be one of the most interesting places on this section of coast. There is only space for three vehicles at the far end of the carpark, but because it is at the end of a long no-exit road we had it all to ourselves, much to our surprise.


It wasn’t quite lunchtime when we arrived, so we decided to walk around the coast a bit to check out the best place to go for a snorkel when the tide was out later in the afternoon. We ended up walking all the way to Blackhead, the next settlement to the south.

There is 4WD access along this section of coast, so we were passed by quite a few vehicles on the beach and on the track. At the Blackhead campground we looked in the back of a fisherman’s boat to see almost a dozen small sand sharks that he had caught in his net, and which were destined for the compost becuse he didn’t consider them worth eating.

In the late afternoon we walked part of the way back to Stingray Bay with our snorkelling gear. At low tide a huge rock platform becomes exposed, but at the bay there is an opening to the sea and a large shallow pool about a metre deep.

As I entered the water there was a comotion in front of me as a small stingray I had disturbed headed for deeper water. The sea was still pretty murky, so we didn’t see as many fish as I had hoped – certainly nothing impressive. The entrance to the pool had waves breaking on the reef edge, but I could see dozens of paua which would have been much bigger than legal size if they hadn’t been in a reserve.

Back at the shore, Felicity was talking to another diver who was very envious of our wetsuits, when the dark shape of another stingray swam past us in just a few centimetres of water.

On the way back to the van we walked around the seawards edge of the rock, and admired the pretty rock pools. The area is known for golden limpets, which looked to me just like regular limpets only a goldish colour.

There was a closed campground right next to the van, which fortunately for us had a very fine freshwater shower still working.

Today has been mostly driving over very dusty backroads, with just a brief stop at Porangahau Beach for morning tea. The camping area was very crowded and there were dozens of overweight kids driving around on noisy quad bikes. We noticed one particularly obese boy drive about 50 metres from his tent to the tap to fill up a solar shower.

The next beach at Herbertsville was yet another wide, windswept, barren piece of coast, but we enjoyed a swim before lunch. This beach was also infested with motorbikes and quads roaring around on the sand.

We were parked beside a memorial to Joseph and Sarah Herbert who began farming there back in 1842. They must have been successful because we could see a large two-storied wooden home in the distance.

We kept driving south most of the afternoon, until we arrived at Castlepoint where we are parked up in the DOC carpark for the night. We have had a brief dip to wash off the dust from the road, but tomorrow we will explore what looks like an interesting spot.