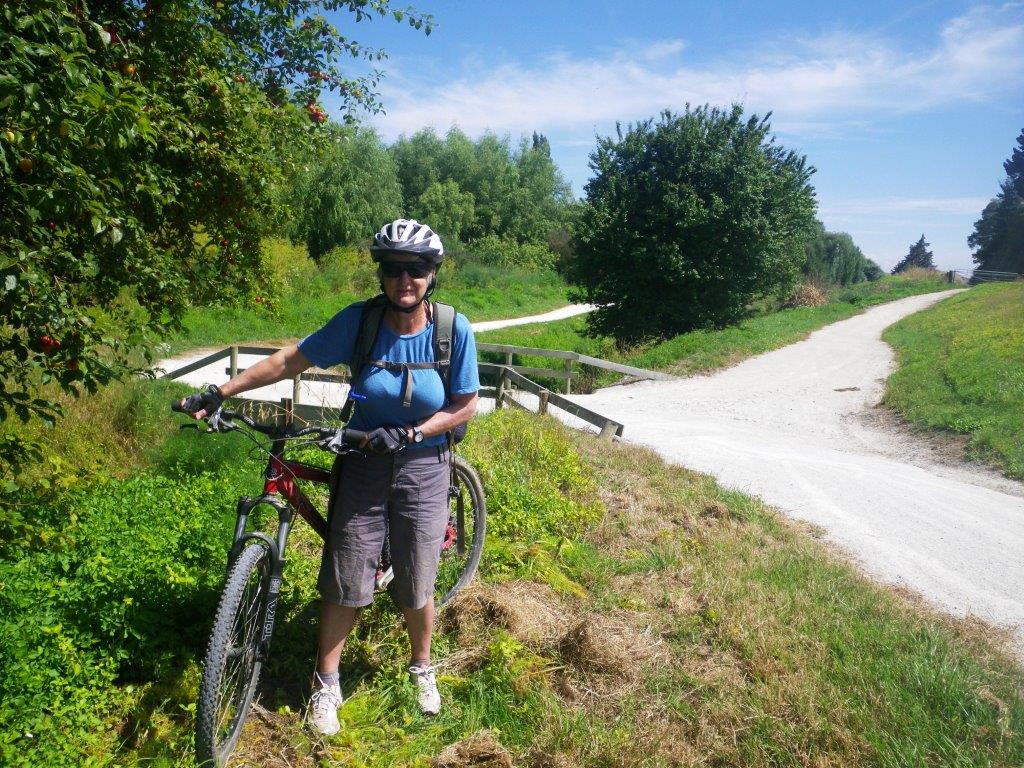 As we have been travelling around Hawkes Bay I have been looking longingly at the extensive network of cycle trails. Today we rode the Puketapu Loop.


When I told Felicity that it started in the centre of Taradale she was a bit dubious because it looked like it was surrounded by suburbia. We parked next to a children’s playground, and rode up onto a stopbank on the edge of the Tutaekuri (dogshit?) River. Almost immediately we were out of town and passing orchards and horticultural farmland.

There were quite a few other riders and walkers on the trail, some of them clearly trying to exercise off their over-indulgence at Christmas. We soon realised that many of the trees at the side of the trail were laden with ripe plums, so we stopped for a feed. For some reason fruit eaten directly from the tree tastes far superior to anything you buy in a shop!

After about 8km we came to the small village of Puketapu, which has a pub where according to tradition, bike riders are supposed to sink a few beers before heading back into town. Fortunately being Boxing Day it was closed, and we were off the hook.

We crossed the river and started back along the other side. Some of the track led through a pretty glade of trees, unusual for Hawkes Bay trails, which are mostly out in the open.

I noticed that some of the orchards had signs advertising “workers wanted”, which suggests that the economy in this area is in reasonably good shape. Felicity had stopped enjoying riding after the first hour, so she was relieved when we completed the full 18km and crossed the back river to where the van was parked.

After lunch we drove back to Clive where we launched the kayaks yesterday. Beside the river is the Evers-Swindell reserve, name after NZ’s Olympic rowing champions, who presumably practised on this stretch of river. Campervans can park overnight for free here, and we had seen interesting tracks leading out to the nearby coast.

The path along the river was quite attractive, but the area along the coast had a lot of rubbish, including a number of large, smelly dead animals, including a deer. I wonder if this is where stolen animals get butchered.

The day was sunny and hot, so we enjoyed swimming in the sea, although it was rather rough. In the surf zone the water was full of fine gravel, which Felicity could not get out of her swimsuit, so we walked across the stony bank and rinsed off in the estuary.

Now that we have finished dinner, the reserve is chocka with campers. It isn’t very peaceful either: jetskis and fizz-boats with water skiers have been zooming up and down the river almost continuously. Presumably they will stop when it gets dark.

2 thoughts on “Taradale to Puketapu”