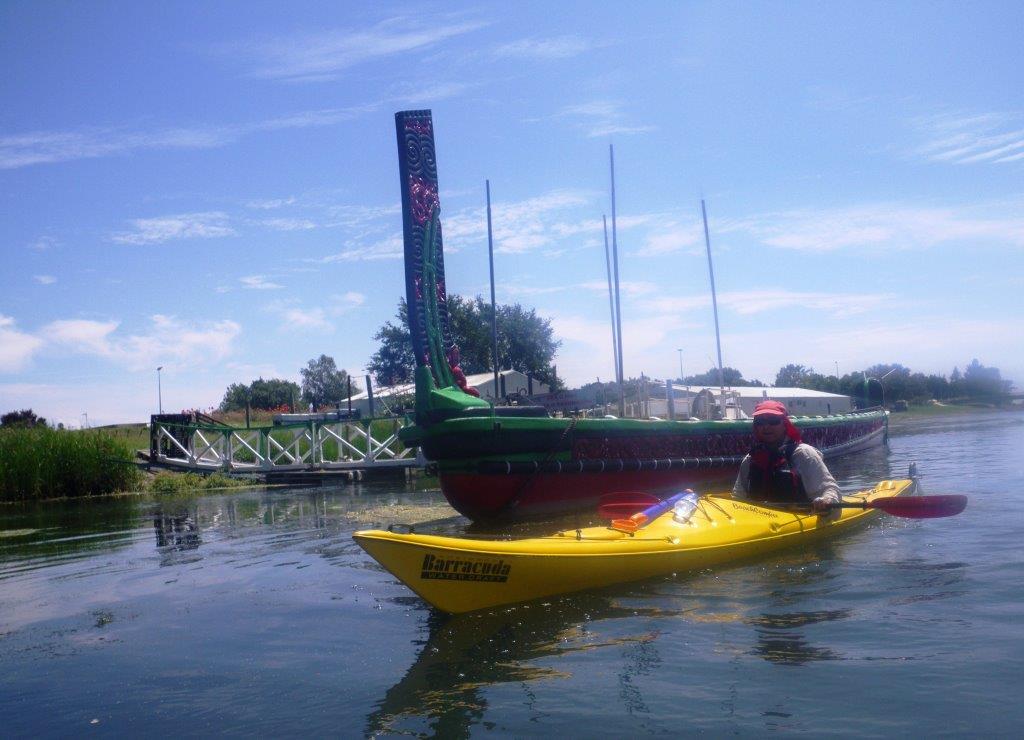 The Clive River south of Hastings was named after Lord Clive of India.


We had actually planned to kayak up the Tukituki River, but when we scoped out a place to launch under Black Bridge we realised it would be a fairly boring paddle with nothing to see except willow trees.

The Clive was a much better choice. The first section passed what I imagine are some of the more upmarket properties in the town of Clive. The river obviously gets a lot higher when it is in flood, judging by the high banks made from stone-filled wire baskets in front of most of the houses.

Almost as soon as we passed under the highway bridge we crossed to the far bank of the river to investigate a magnificent waka, which would have forty paddlers when fully manned.

It didn’t take us long to leave the town, and start passing orchards and farmland. At one point we discovered a plum tree right on the river’s edge, but we could only reach about half a dozen ripe ones. Sadly, standing in a kayak is not an option.

The river is rather clogged with weed, but our boats seemed to get though it without problem. There were lots of birds to see on the banks, and we startled lots of medium sized fish, which Felicity reckoned were trout.

I spotted an accessible peach tree a bit further on, but unfortunately the fruit won’t be ripe for a few weeks yet so I didn’t pick anything.

Eventually we came to a railway bridge and decided to stop for lunch. As we were sitting on the grassy bank under a tree we spotted two dogs coming towards us, but they turned away when they saw us. A few minutes later a young Maori couple walked by, wished us Merry Christmas, and asked if we had seen two dogs.

They told us they had just discovered the dogs attacking their pet goat, and they were keen to get a photograph. When they found the dogs they decided to catch them and went away to get some rope.

When they returned they were accompanied by someone on what ca only be described as a motorised chilly-bin (or “eskie” if you are an Australian). It had four tiny wheels and a petrol motor on the back, and one person can sit on top and steer with a set of tiny handle-bars.

The dogs were duly caught, and led back past us on their way to the pound, and probable destruction. Once dogs get a taste for attacking stock there is not much can be done to stop them doing it again.

So our peaceful lunch stop ended up with quite a bit of drama and entertainment! It was a little bit harder paddling back because the wind was in our faces, but by about mid-afternoon we were back at the van.

Now we are back at Clifton Beach where we have had a swim and a shower, and are about to eat dinner as the sun sets behind the hills.

One thought on “Clive River”